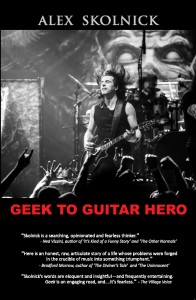 Alex Skolnick, the talented lead guitarist of thrash metal band Testament and jazz band The Alex Skolnick Trio recently wrote an autobiography Geek to Guitar Hero.  He begins with his childhood where he talks about his challenging upbringing in an academic family, his rise to fame with Testament, and his independent journey towards becoming an accomplished jazz player.  I got the sense that he is a tortured soul who has always felt inadequate and has overcome many personal demons to become the respected musician he is today.  He tells a lot of tour war stories and shares his brutally honest opinions of people and bands within the metal scene.  Reading about Alex’s development as a person and as a musician, through his own eloquent and thoughtful words, made the book hard to put down just as listening to a Skolnick solo is hard to tune out.

Alex was raised in Berkeley, California by his Ph.D. graduate parents who rarely showed affection or support for their two sons.  His father is a highly regarded professor in the criminal psychology field but has an explosive temper.  His mother’s career is in social psychology but she was dismissive.  His parents did not encourage expression and were often too busy with their academics to acknowledge their sons.  His older brother Michael often tormented him and was fiercely competitive, particularly in playing guitar and trying to “make it” in a band.  Being an awkward loner with zero confidence, Alex had a hard time making friends at school.  He refers to his childhood as traumatizing and damaging throughout the book.  Luckily for him and for us he found solace in practicing guitar as much as possible.

Growing up in Berkeley meant being surrounded by hippies and their counter-culture ideals.  Metal became a direct, aggressive outlet for his inner anger and a form of rebellion.  In the Bay area metal scene, he found a place where he belonged.  Alex began taking lessons with Joe Satriani for about a year.  He joined Testament (originally called Legacy) at 16 years old and was touring by 19.  Although touring gave him the perfect escape from his dysfunctional family, he refers to the guys in Testament as immature, substance abusing idiots.  Alex would practice guitar and try to improve his playing but he was met with much resistance and ridicule from his bandmates.  All they wanted to do was get drunk and high or watch television which left him feeling further alienated.  Just as he was an outsider growing up, he now felt like an outsider in his own band.

Testament’s popularity grew with successful records like The New Order (1988), Practice What You Preach (1989), Souls of Black (1990), and The Ritual (1992).  As their popularity grew, they began to do bigger tours and get airplay on MTV’s Headbanger’s Ball.  Within the band there was a growing faction between Eric Peterson and Chuck Billy who wanted to play old school thrash and Alex who wanted more melodic tunes.  The catalyst to Alex leaving Testament to expand his musical horizons was the realization that he was trapped in the closed-minded world of metal where any show of personal growth was met with scorn. There had been much band infighting, poor management decisions and lack of leadership.  It was his time to go.

During his departure from Testament in 1994, he joined metal band Savatage.  He also played with Stu Hamm, Ozzy Osbourne, The Trans-Siberian Orchestra and made an appearance on Lamb of God’s Ashes of the Wake album.  Alex had always been a fan of Miles Davis and he couldn’t help but feel pulled towards jazz.  His soul was craving something different and jazz was it.  He pushed himself to learn all the scales and theories, he reflected on his earlier lessons with Joe Satriani, and he became more disciplined in practice. He went on to earn a BFA in jazz at the New School in New York City.  In 2002 he started The Alex Skolnick Trio which I recommend checking out.  They play originals and rock and metal covers with a jazz twist.  Alex describes it as “not your grandfather’s jazz.”

There is no denying that Alex Skolnick is a brilliant guitar player who has contributed much to the thrash metal genre and now jazz.  Traveling the world, doing what he loved, developing his craft and enjoying fame wasn’t enough to overlook the rigid attitudes and destructive behaviors found in the Testament camp.  It left him wanting more out of his music and his life.  He embarked on a long journey filled with painful self-exploration to get him to where he is today; an accomplished musician who lives life on his own terms and doesn’t care if you think he’s metal or not.  Still, Alex hasn’t completely abandoned his heavy metal roots.  He may have had his differences with the members of Testament but they are like brothers and he has rejoined the band.  They are currently writing and recording an album to be released in 2014.