As a follower of (too) many atheist Facebook pages, I heard about the book The Believing Brain by Michael Shermer last year. This book’s purpose was to explain why some people believe in God and some don’t. As someone who decided at the age of five that there was no such thing as a god, I’ve always wondered why people believe. And furthermore, in this current negatively charged political environment, I wonder what makes conservatives so conservative, what makes liberals so liberal, and why people think Waffle House food is edible. These are the real questions in life and The Believing Brain was supposed to have the answers. 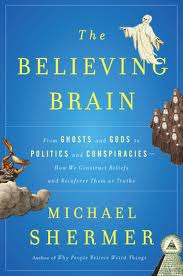 I cannot tell a lie, this book is a doozy — chock full of vocabulary words, scientific theory and things that, quite frankly, I’ve never ever heard about.  Hey, I was a theatre major. I haven’t taken a real science class, like, ever. And to be honest, I did have some trouble understanding what Shermer was talking about the first few times I’d read a paragraph. But I struggled through the tough parts only to be rewarded with glimmers of understanding. A faint grasp at times, other times a firm grip – no one could ever question the author’s authority on the subject at hand. Indeed he dissects his own skepticism and libertarian leanings, making it easier for this theatre major to understand and identify with his thought process. While I would have liked the book to be more pedestrian, more practical in its delivery, I appreciate the thoroughness with which Shermer approached the myriad of complexities of the human brain.

When phrased simply (by a theatre major) we have our beliefs and we back them up with the facts we choose to see. Shermer calls this “belief-based reality” and, along with words like patternicity and agenticity, he details how our brains process information and/or how they don’t. Some people (monists) believe the brain is a singular organ, while other people (dualists) believe brain and mind are two separate things. This is where it all starts to get tricky. Much like the body and soul debate (to which a non-believer would of course scoff and cough), it seems this is the dividing line between those who believe voices are directing them as they ascend the heights of a frozen mountain and those who know the voices are the result of hypothermia, exhaustion and oxygen deprivation.

One by one Shermer addresses the beliefs that divide us – God, the afterlife, aliens, politics and conspiracies. Surprisingly (or not) some of our beliefs are genetic. That’s not saying there is a “conservative gene” or a “free-thinker gene” but that people, through natural selection, will tend to separate themselves from those who don’t think like they do and will surround themselves with those that do. And so it is that there are predictable divisions between conservatives and liberals.

In fact, this is partly what mystifies me regarding people and their political beliefs. How can it be that the Tea Partiers can be for less government interference in our lives yet they support candidates that are trying to dictate who can and can’t get married? And how can it be that Obama supporters overlook the fact that he signed away our Constitutional rights? That’s a biggie, but they’ll call it a compromise and continue to praise their rock star president despite the fact that he’s allowing the police to scan your status updates to predict possible crimes. Talk about a violation of the First Amendment! And this pick-and-choose mentality – how is it that the right to bear arms is so quickly dismissed by the bleeding hearts? Shermer doesn’t quite take the book into this territory and I wish he had. He does give a glimpse of an answer: the brain, when reconciling these facts with personal beliefs, is being driven by emotion not reason. We have an emotional need to “be right” and we will tell ourselves anything to believe it, including dismissing the other guy as “being too emotional” when in fact we should be pointing that finger at ourselves.

He ends the book with a chapter on “The Cosmologies of Belief” – an incredibly dry, scientific and historic trek into the universe and our understanding of it. Ultimately his point is that understanding is constantly changing and takes time. “All intellectual movements swing like pendulums through mental space, oscillating between extremes then settling into an ever more narrow groove of ideational range.”

In the end, I’m not sure how much this book helped me understand “the other guy.” Yes, it helps to know how the brain is wired, how it works and why it is the way it is. But what the book didn’t address is how variation is possible – people are capable of learning, after all. How long must we wait for the pendulum of civil rights to land in a place where we all can have them? What role does empathy — or lack of empathy — play in a person’s ability to understand and identify with the other side? What makes the First Amendment more or less sacred than the Second? Why do people believe in one god over the hundreds of others? The surface was scratched on these fronts, but more in-depth research is required for this theatre major to understand. Believe it.