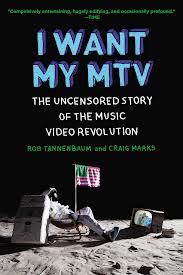 For those of you that have forgotten or are too young to remember, MTV (formerly Music Television; they changed it to MTV a few years ago) was a network consisting almost solely of music videos, music-related programming, and not much else. As the many, many articles and documentaries about MTV have shown, people liked this so much that it became a cultural revolution to the point where it may have shifted the 1992 presidential election.

The creation, popularity, and current change of MTV is a topic that’s been well covered, almost since the actual creation of the network. I Want MY MTV, written by Craig Marks and Rob Tannenbaum is an exhaustive, detailed oral history of the period from 1981 to 1991, called “the golden era” by everyone interviewed. When I say exhaustive, I really mean long; the book tops out at 600 pages and a good 150 of those pages consists of a grouping of rock stars/video directors/former executives re-wording the same thought. “There was no template for music videos in 1981” is a solid and probably true statement, but when everyone from the CEO to John Taylor from Duran Duran says it, it feels like I Want My MTV could really have used a good editor.

The overwhelming detail about the book does come in handy in some areas. Marks and Tannenbaum did manage to interview almost everyone (notable exceptions being Kurt Loder, who is allegedly writing his own MTV book), and when the book begins its long journey from the initial concept of a music video channel to the massive cultural and business force it became, it gets really interesting to hear from the initial executives as to the actual nuts and bolts of the company. Fun Fact: MTV was created by both Warner Communications and American Express. Warner wanted to add a music enterprise to their already-huge lineup of movies, TV, and music — and American Express thought that the creation and popularity of cable television would lead to interactive television, where AMEX could sell their services through the cable connection.

This amount of story and detail runs throughout the book, whether it is about MTV’s corporate side, or the artistic side where multiple chapters of the book are about a genre of video or music, be it the new wave/synth pop era of Duran Duran, the metal scene (yes Alternative Control readers, metal gets a lot of coverage in the book, with lots on the Headbangers Ball and three of the best David Lee Roth stories ever) and the alternative rock scene leading to the 90’s. Since so many people were interviewed for the book, each genre of music is rich with detail from the great directors that got their start in videos to the bands themselves recalling the eras.

The two most interesting chunks of the book involve the issue of racism within the networks early playlist and the change of the channel from all music to none. For the race aspect it’s curious to learn that since the original creators of MTV came from the world of FM rock radio the original idea for MTV was that of a mostly white, rock station. As the channel grew and the initial videos came from then unknown British electronic acts the channel slipped further away from black artists to the point where it took an aggressive campaign from record label CEO’s to get anyone from Michael Jackson, to RUN DMC to even Living Color on the network. (Another fun fact: Living Color’s videos were only played after the record label threatened to pull their entire roster from the channel, which included Jackson’s videos.) The script obviously flipped, as Michael Jackson went on to become a huge figure in MTV’s legacy and the channel itself ended up using hip hop to as many execs put it “get us out of the doldrums of metal videos.”

As the book closes up, there is a huge post-mortem as to why the channel strayed so far away from its original form. Everything from the rise of the Seattle scene, to the initial season of The Real World, to the lack of quality of videos is called out for the reason why the network moved to lifestyle programming. The takes on the demise are great, but as with much of the book interviews run wildly around a running narrative of nothing. MTV’s death as a mass media entity is only sad if you want things to stay the way they are. As the channel got bigger the gap closed on a lot of the freedom of the videos, or whom the channel would play whereas now You Tube and Vimeo have captured both the market share and the creative spirit of the medium. As U2 manager Paul McGuinness said in the book: “MTV and (current owner) Viacom’s utter failure to transfer their huge, worldwide audience from cable TV to internet will go down in history as a disaster.” It’s no one thing that killed the former music network; it’s the simple evolution of both a company and a culture.

I Want My MTV is an easy buy if you were alive during that time period and as of this review it’s reasonably cheap as a paperback. The better idea though is to get it for your Kindle or iPad, as you immediately want to put that hardcover book down to watch the horrible videos the book makes fun of.