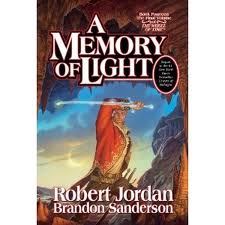 Nine-hundred and nine pages later, I’m done with A Memory of Light.  Done with the Wheel of Time series.  Forever.

I was sad as I read the last chapter.  This is it!  I would never again read the adventures of Rand, Mat, Perrin, Rand’s harem of women, or the countless other characters that made up Robert Jordan’s intricate fantasy.  In truth, there were so many characters that by the end of the series, I didn’t even know who some of them were.  Of course I kept track of the important ones…

The last three Wheel of Time books were completed by Brandon Sanderson using Jordan’s draft and notes, as the original author passed away in 2007.  A Memory of Light is much faster-paced than some of the previous books; every page is a battle against the Dark One.

Wheel of Time fans don’t need to be told they should “definitely check out” A Memory of Light, because they’re all probably finished with it by now.  However, if you want to get into fantasy books and you’re not sure where to start, pick up a copy of the first in this series, The Eye of the World.  You’ll find that Jordan’s world is a happy medium between Tolkien and George R.R. Martin – not as gritty as Game of Thrones, but more modern than The Lord of the Rings.

Succumb to your inner nerd!