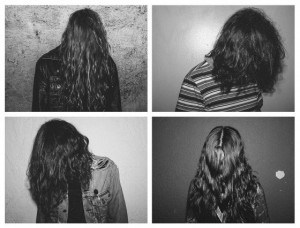 What do you get when you take certain current and ex-members of such bands as Black Mountain, Saviours, and Night Horse, and a drummer who was born to play aggressive music, and put them in a room together?

Well, you get this Obliterations, which just happens to be one of the most volatile and exciting punk bands to come down the pike in the past few years.

Over the course of two EPs and a full length — Poison Everything, which will be released October 14 on Southern Lord — the band has proven they can deliver the goods when it comes to cranking out loud, aggressive music that is also quite catchy. Featuring vocalist Sam James Velde (Night Horse), guitarist Stephen McBean (Black Mountain, Pink Mountaintops), bassist Austin Barber (Saviours) and drummer Flo Schanze, Obliterations’ sound has a nice rock underpinning to it — but this is rock dipped in venom and invective.

So, because we care about exposing you to all that is well and good in the loud rock scene, we sent Velde some questions concerning the origins of the band, the development of their music, their provocative videos and their plans for touring, among other subjects.

Below are his answers. Prepare to be obliterated!

What were the main motivations for starting the band? How did it come about? Was it intended to be this aggressive and in your face?

The initial motivation was to just kinda jam with friends. Both Stephen and Austin had recently moved to Los Angeles, and their bands still remained in other towns. So it was like “you guys wanna play some music today?” That was really the impetus behind it. When we jammed the first time it had a classic hard rock kinda vibe. We all really enjoyed playing together so we decided to do it again. The second time around Stephen had a riff he wanted to try out and that became the first song on our self titled single “Kick Against The Pricks.” The rest of the music just seemed to head in that aggressive, driving direction. It just fit. So, no it wasn’t intended to be anything really. It just happened.

In the span of about three years the band has released two EPs and is about to release a debut full length. With all the other projects band members are involved with, how do find the time to be so prolific? Is this band becoming a priority?

Well the timeline doesn’t really stretch to three years. We wrote the 1st EP in a couple rehearsals aside from the vocals at the end of 2012. The recorded it in our rehearsal space. Then didn’t play again together for a couple months. In the meantime put the music up on a bandcamp, etc., then wrote the 2nd EP in a couple rehearsals a couple months later. Then we took a month off and then rehearsed and played shows. We have a start/stop relationship with this band due to other people being in other bands. The collective time working on the band seems to be the sum of about a year at this point. We just happened to work really well creatively together. Songs just pour out really. We tend to make the most of the time we have together. This band is important. I can’t say its the number one focus for everyone, though.

And, do you consider it a supergroup?

Outside of the length, how would you say Poison Everything is different from your previous two EPs? How is it similar?

Well the record has a greater diversity of sounds, tempos and strong structures than the EPs. It’s definitely a progression. Sonically it’s a drastic leap. We recorded the record on the same Neve console that Nirvana, Fleetwood Mac, Dio, Tom Petty and countless others recorded seminal records on. I love the way the EPs sound, but this record has its own thing going on. So to speak. It’s similar in the approach and attack. It’s really hard for me to have a strong perspective though. Aside from writing and recording the songs, I haven’t spent too much time listening to the recording after we mixed it. I’ll leave all that up to people that buy the record, review it, all those kinds of things.

Also, your lyrics contain a lot of pointed political and social commentary. Was this done on purpose or was this how the lyrics just came out? Is the band set up to write about almost anything if you wanted to? Or are you keeping it more on social commentary?

Both. The lyrics are about things that affect us personally and as a group, both socially and politically. Reflections on contemporary society, I suppose. Some of the new songs have a much more personal slant to them as well. I basically come upon an idea or topic and then the rest just sorta just surfaces. I tend to over think and dwell on things happening in my life, so writing them into lyrics is pretty natural. I really don’t know how to explain writing lyrics though, that would be my best attempt. Ha.  Some of the songs on the new record we’re also inspired by books, films, etc. It all acts as inspiration and tends to collide together. The only thing I don’t over think and dwell on is  the lyrics though. I just let them out and move on. More like a conversation.

So far I have come up with all the lyrics. The riffs have been both Stephen and Austin. We all work on arrangements.

Also, the videos that have been made for a few of the songs on your previous EP releases are very thought provoking in all the right ways. A little shocking, too. Was this your intent? Do the videos act as another way to get your message out?

100% our intent. Yes, the videos are a representation to the songs.

Once the record has come out, you have a West Coast and a European tour booked. How important is it to get out there and kick out the jams for the people? Can we expect more dates in other parts of the country like the East Coast and Northeast?

It’s really important to play live. Again, it’s part of the whole representation. We hope to play as much as we can considering everyone’s schedules. We’d like to get East for sure. I don’t see any reason why we wont make that happen in 2015.

In addition to the touring, what else is coming up for the band?

We’ll probably release the songs we’ve recorded that didn’t make it on the record at some point. Hopefully write and record more music, I suppose.