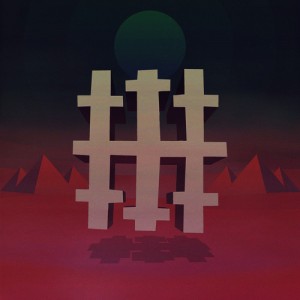 I’m entirely new to the English noise-rock band Three Trapped Tigers. I was just browsing for some new music and liked the cover art. A little research revealed that they were an instrumental trio. The make or break for me with many bands is the vocals, so I dove right in to this knowing that it probably wouldn’t offend me. Right off the bat I knew I stumbled upon something special. Silent Earthling is probably one of the best first-time listening sessions I’ve had so far this year.

I’m confused by their description as a noise-rock band. Although the mix is very loud and the composition is somewhat chaotic, this reminds me of synth rock music on steroids. Bright and colorful synthesizers, woozy electric guitar and thunderous drums whirl about in shamelessly flamboyant fashion. This is highly energetic, optimistic and triumphant stuff. Each track is packed with unexpected shifts in scope and attack, all the while building drama and melody to the point of musical diabetes. “Strebek” sounds like an epic sword fight in an ice castle with different timbres of keyboard and guitar practically dueling with each other for your attention.

Despite the happy and major chord infestation here, the music still manages to carry a lot of weight and power. The opening of “Kraken” is almost like a war cry, and the rest of the song is a darkwave powerhouse of zealous synths practically peeing all over the musical scale. The band’s loudness sometimes translates into sweet-sounding violence. “Blimp” for example jabs and slams about in a gleeful, childish fit.

The most impressive thing is that no matter how far out each of these songs find themselves, they always retain a harmonious center. The technicality of this album doesn’t keep it from being accessible. Drummer Adam Betts is a frantic but calculated monster, pushing the limits of listenability for only as long as required before settling back into the groove. Guitars and keyboards dance around each other in super animated benevolence, but musicians Tom Rogerson and Matt Calvert understand that there’s times when the listener needs a break. “Hemisphere” acts like a breather, with a more typical electronic base to build its quieter and prettier ambient sounds.

To put it plainly, this album is a lot of fun. The interplay between all the instruments is unpredictable and entertaining to the very last note. “Rainbow Road” sounds like I’m hang gliding through a metropolis infested with melodious car horns and multi-colored searchlights. “Tekkers” is a schizophrenic hip-hop/math rock mashup that manages to remain remarkably danceable through its duration. I find myself almost laughing at some of the transitions this music takes, frankly having the time of my life the entire time. Considering the amount of new music I listen to, it takes a lot for music to keep me at the edge of my seat. Silent Earthling has me practically falling off the couch.