BAD horror movies bring me a lot of joy.  I’m talking about the kind that is so awful it’s insulting.  Bad scripts, bad acting, bad special effects, just plain bad.  I particularly like movies from the 70s because they weren’t torture porn like today’s horror movies — and more importantly, the boobs were real.  Cutler’s Records in New Haven, Connecticut has the most hideous horror movie collection known to man at the right price.  While digging through the bins, I found two movies that are cinematic gold:  Don’t Look in the Basement (1973) and He Knows You’re Alone (1980).  Movies with cautionary titles teach us important lessons, so I strongly recommend you watch these two right away.

In Don’t Look in the Basement, we’re introduced to a ridiculous cast of characters who are patients in Stephens Sanitarium.  A lobotomized black guy named Sam and his toy boat, a woman possessively  rocking a baby doll, an old crone, a nymphomaniac, a hyper ginger with a fro whose sole purpose is to annoy, and a paranoid army dude in full combat gear are just a few of the outcasts.  Being part of a new experimental treatment, they are encouraged to act out their delusions.  In the first scene, Dr. Stephens instructs an axe murderer to violently chop wood as part of his treatment.  “Use the axe, listen to me, use the axe!” he commands.  When Dr. Stephens turns his back, this homicidal maniac surprisingly uses the axe to hack him to death.

Literally a second later, staff member Dr. Geraldine Masters takes over.  A decent looking blonde nurse is hired and the doctor reluctantly introduces her to the housemates.  The old crone warns Nurse Charlotte to “Get out!” one too many times and winds up with her tongue cut out.  Dr. Masters starts acting shady by burning a patient’s record, cutting the phone lines, and killing anyone who tries to reveal her secret.  Charlotte spirals into madness as dead bodies turn up and the patients start to terrorize her.  It’s not long before she learns that Dr. Masters is actually a patient!  In the final scene, this imposter is axed to death in the basement by all the patients.  Our dim-witted friend Sam takes over and kills everyone while Charlotte escapes.  The end.  It’s not gory, it’s not creepy, it’s not too violent and there’s very little basement.  But being trapped in a house with mentally ill people who have free reign is terrifying!  Fact: This film is one of 39 “video nasties” that were banned in the UK for obscenity and graphic violence.  The remake is currently in production and I predict it will get a Grammy nod. 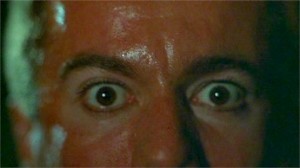 From the silent stalker with a knife to the same exact piano notes used in the music theme, He Knows You’re Alone is yet another rip off of Carpenter’s Halloween.   The plot is simple: a guy is dumped by his fiancé, who marries another man shortly after.  The emotionally damaged ex murders her on the couple’s wedding day and from that point on he’s hell-bent on killing all brides and everyone around them.  Unlike other horror movies of that time, this guy doesn’t wear a mask.  He doesn’t need to.  Look at his piercing, eyeliner-rimmed eyes.  Look at them!  My favorite aspect of the movie is that in every stalking scene he sticks out like a sore thumb.  He just stands there glaring at his victim and yet they don’t notice him at all.  This movie contains 94 minutes of prowling, occasional boobs, a phony head in a fish tank, and intense bulging eyes.  This is the perfect movie to watch on Valentine’s Day if your girlfriend keeps nagging you for an engagement ring.  And what’s more?  Tom Hanks chose this gem as his first movie appearance.