“Remember, remember the fifth of November, Gunpowder, treason and plot; I see no reason why Gunpowder Treason should ever be forgot.”

Guy Fawkes, also known as Guido Fawkes (not to be confused with a Jersey Shore cast member) came into my awareness after watching V for Vendetta. At first I thought the masked man with relaxed hair and a cape looked ridiculous but then I started to think….he’s kinda hot! Then again I am a sucker for guys with long hair and a beard. Who is this mysterious Geezer Butler look-alike?

Guy was born circa 1570 in York, England and was technically a terrorist. In a secret plan to restore a catholic monarch to the throne Guy along with twelve men planned to blow up the king and members of Parliament. On the fifth of November his explosive plan was foiled when he was discovered in the cellar beneath the House of Lords with 36 barrels of gunpowder. Fail. This event became known as the Gunpowder Plot of 1605. The thirteen conspirators were charged with high treason, drawn by horse to the execution location, hung, junk cut off, intestines torn out, head chopped off and then cut into four pieces. Not a good time but potential Cannibal Corpse lyrics? Before Guy was to be hung he jumped from the scaffolding and broke his neck. Every fifth of November the people of England celebrate the King’s escape from death by lighting a bonfire on Guy Fawkes Day, aka Bonfire Night. The children of Great Britain make “the Guy” dummies and throw them into the fire after parading around the streets. 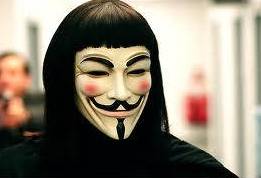 In the movie V for Vendetta, V is spewing v- words while systematically kicking all kinds of ass and swinging his silky Pantene hair around. His speech pattern is delivered in iambic pentameter; syllables of five. I’m oddly attracted to this. He is the anarchist who believes the power belongs to the people. There is a scene where his cohort Evey is imprisoned and tortured. She chooses death over collaboration with her captor in which he then sets her free. The message becomes clear; we must live an authentic life that is true to our beliefs or else we will become psychologically imprisoned. The moment we unapologetically accept who we are or refuse to compromise our values is the moment we are free. I’m all about revolution and freedom fighters but my crush on Guy quickly ended when I learned that Agent Smith from The Matrix played the role of V. Yuck.

There is an internet based civil disobedience group called Anonymous which has adopted the Fawkes mask and spirit and gives computer geeks a place to anonymously fight for freedom, target corporations and hack websites amongst other mischief. Though their actions may be futile they get the horns for attacking Monsanto, the largest manufacturer of genetically modified soybeans, The Church of Scientology and the hate-based Westboro Baptist Church. I’ve partaken in my own acts of civil disobedience like ordering a “medium” instead of a “Grande” at Starbucks, walking against the flow of pedestrian traffic in Stew Leonard’s, and stealing office supplies from the job. Don’t fuck with me.

Although Guy and V die in the end, as Medgar Evers once said, “You can kill a man but you can’t kill an idea.”