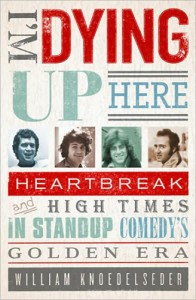 In 1972,The Tonight Show moved from New York to Burbank, California and with it went an entire generation of comics, most of whom would go on to become the biggest stars of the comedy boom of the 1980s. In William Knoedelseder’s 2010 book I’m Dying Up Here: Heartbreak and High Times in Stand-up Comedy’s Golden Era, we get an incredibly in-depth look at both the migration and the bitter feud between the era’s comics and the club that started them all out.

Knoedelseder it seems is the perfect guy to tell this story. As for former journalist for the Los Angeles Times, Knoedelseder covered this era in depth and clearly knows his subjects both personally and professionally. The comics themselves (and the amount of detail we get on their early careers) is what makes the book interesting. A murderer’s row of talent was involved in the east coast to west coast migration: Jay Leno, David Letterman (who’s closeness to each other in the book is fascinating considering the way their relationship is now), Richard Lewis, Elaine Boosler, Robin Williams, Sandra Bernhard, Freddie Prinze and so many more are featured in the book, to the extent that it’s not shocking anymore to read about Gallagher bumping into Williams and Tom Dreesen while Letterman is dealing with a drunken, heckling Ringo Starr on stage (Letterman’s response to Ringo: “Oh, that makes sense. You ruined your career, now you’ve come here to ruin mine.”)

While the book (a very packed 268 pages) is fascinating for the characters involved alone, the plot is divided in two, as I’m Dying is one half about the comedians banding together to strike against the Comedy Store over not getting paid for sets and one half an in-depth look in at the lives of Richard Lewis and his comic peer and close friend Steve Lubetkin. The story begins with Lewis and Lubetkin as young comics coming up in the New York scene. Their goal at the time is a constant theme throughout the book: land a spot on the Tonight Show, succeed, have Johnny invite you to the couch for a segment, watch the offers roll in. One of the comics in the strike part of the book, Tom Dreesen had that exact path as he went from sleeping in his car to a developmental deal at CBS and $25,000 days after his first Tonight Show appearance in 1975. Before Lewis and Lubetkin leave for California they make a blood oath: whoever becomes famous first will help the other one. As Knoedelseder puts it next, “It was a pact that would haunt Lewis in the years to come.”

While the career highs of Lewis and the frustrating run of Lubetkin intersect throughout the book, Knoedelseder continues to set up the major story of the revolution of the comics against The Comedy Store. First owned by nightclub comic Sammy Shore, the club was transformed into a flourishing proving ground for young comics by his wife Mitzi, who later won full ownership of the club in the aftermath of their divorce. Fun fact: these people had a son named Pauly, who later starred in Bio Dome, a very underrated movie. Mitzi is portrayed in the book as part messiah of comedy, part den mother with a strange hold over the comics and part demon spawn. Under Mitzi’s leadership the Comedy Store became a well ran machine, with the creation of daily lineups, a tiered structure for comics that fostered intense competition and later, the chance to perform in front of everyone from ex-Beatles to Carson himself.

As the Store became successful it also became a business, which is where the great divide between Mitzi and the comics begin. After a New Year’s Eve show where the audience was charged $20 a head to watch a lineup consisting of Dreesen, Leno, Letterman, Williams, a young Michael Rappaport and more, it finally clicked to Dreesen after lending money to Rappaport to pay for his breakfast: Who’s serving who? The comics are making the Store popular (and rich), but the ideology of the club is to be a free proving ground for young talent.

From this point the book begins to veer into the formation of the Comedians for Compensation (CFC) and the legal and illegal war that was held between comics such as Dreesen, Lewis, Leno, Letterman, Boosler and more and Mitzi Shore and her loyalists at the Comedy Store. Knoedelseder takes you very inside as he has almost word-for-word accounts of the initial formation of the CFC to the structure of a full out strike in front of the Store that divided friends like the Civil War. Without spoiling, the feud takes a tragic turn at points, which is pretty well foreshadowed at the outset.

I bought this book for roughly $2.99 on Amazon, so it’s safe to say that it’s worth the purchase. In fact, looking at Amazon right now it’s currently available for $6.00 new and $9.38 for the Kindle. I’m Dying is fascinating if you are looking for an interesting and sometimes sad story involving a huge amount of well known people. I can’t recommend it enough for the price.