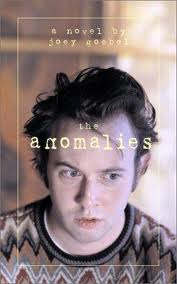 Way back in another life, I worked at a children’s publishing house in New York City. One of the perks was people who worked at other publishing houses would trade review copies of books with us, and people would put the ones they didn’t want in boxes around the building. The books inside were free for the taking.  I walked past one such box one day and a red book with black print that simply read The Anomalies  by Joey Goebel caught my eye.  I took the book and read it cover to cover that night. I still have that red book, battered and dog-eared from reading it a couple of times a year since 2003, but also from loaning it to friends.  The book is truly that good.

The Anomalies tells the story of the world’s least likely friends who form a rock band with the goal of  changing the world though the most mind-blowing rock n’ roll music ever made. Luster, the leader of the group is a 24-year-old genius (or possibly space alien) who is stuck living in the ghetto with his angry, crack-dealing brothers. Opal, at 80 years of age, is his best friend and former lover – who just wants to party and rock out, running from her family that wants to shove her in an old folk’s home and forget about her. She spends her days looking after Ember, the hostile and angry 8-year-old girl she “babysits” – though Ember’s parents haven’t been seen in months.  The three befriend Ray, an Iraqi-turned-American who doesn’t understand why people think he is gay as he searches for a man he shot and wounded in the war to make amends.  And the group is rounded out by Aurora, a chaste Satanist in a wheelchair.

People stare. People laugh. And the group of friends let every last word roll off their backs as they work through their real-life problems and lose themselves in the beauty and wonder of music that only they could make.

It’s not often that I say a book is “life-changing,” but there is something about the way Goebel effortlessly strings these characters lives, struggles, victories, and simple moments together is at the very least magical.  It’s a quick read, with everyone telling their story in first-person, and when you reach the last words, you not only want more for yourself, but for the characters who seem so very real.

Joey Goebel’s second book, Torture the Artist is much longer and delves into the similar theme of how shallow modern popular culture can be.  The book tells the story of Vincent, one of the students enrolled in the experimental New Renaissance Academy.  Guided by Harlan Eiffler, the one person Vincent can trust in his broken life, Vincent’s life becomes one of increasing sadness, alienation, and depression – all with the goal of creating the perfect “tortured artist.” 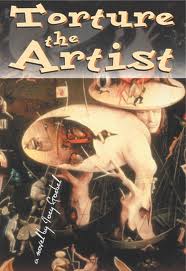 The Academy’s goals appear to be, at heart, pure. With commercial television, movies, and music nothing more than shallow and meaningless drivel, imagine what could become of American – and even world – culture if true artists who had integrity, and believed in quality over quantity were the ones behind the entertainment industry.  As Harlan grows more bitter with popular culture and his failed music career, and Vincent grows older and the “torture” inflicted upon him by Harlan seems increasingly cruel, one is left to wonder if success and art is truly worth all the struggle and pain.  Much like The Anomalies before it, Torture the Artist leaves you wanting to know more and for the characters to have something more. Despite some truly despicable actions from various characters in the book, they are all written in such a way that the author easily elicits empathy, and even sympathy, for what led them to where they are when at some of the lowest points of their lives, but also, with happiness for when they are at their highest.

Joey Goebel, oddly, is very popular in Germany and Austria, where these books have been wildly successful. I think they may be too quirky, and point out too much of what is wrong with mainstream American culture for them to really take hold here.  If you’re looking for something different, compelling, and not afraid to make fun of the “norm,” though? These are the books for you.