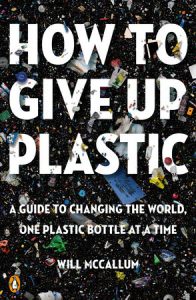 It seems like everywhere I look, every restaurant I go to, and every National Geographic article I read, someone is trying to reduce plastic waste.  The consequences of plastic waste  are a worldwide problem and every measure of humanity — from individuals to corporations and international alliances of governments — will need to address them at some point.

But unfortunately, it won’t be as simple as telling other people to buy reusable straws.  I read Will McCallum’s book How to Give Up Plastic: A Guide to Changing the World, One Plastic Bottle at a Time this summer in an attempt to be “part of the solution.”  First off, the entire book could have been consolidated into a couple blog posts and that would have covered all the actionable information.  Secondly, reading this book made me realize how many of the products we take for granted every day are effectively impossible to acquire without plastic.

In fact, the book acknowledged that it would be unrealistic for individuals to solve the plastic problem.  One of the repeated suggestions was for readers to round up all the “xyz bad plastic products” in their homes, that they’d already paid for, and mail them back to their manufacturers with an angry letter demanding a refund.  (Apparently this author hasn’t read my money columns…)  The point of this wasn’t to actually get money back, but to show corporations that consumers wanted plastic free products — i.e. the products do not currently exist in affordable and accessible forms.

And forget about anything at the grocery store — if it’s not made of plastic, it’s packaged in plastic.  Even items purchased in bulk to reduce waste are still wrapped in plastic film (toilet paper, meat, rolls of paper towels, bars of soap) or delivered in plastic bottles (shampoo, detergent).  Some products even have secret tiny plastics in them — microplastics — that get washed into the ocean as we brush our teeth and exfoliate our faces, to live on forever in the stomachs of seagulls.

But it gets worse. It turns out that many “paper” products like wrapping paper and paper cups are lined with a thin layer of plastic. And there’s even plastic in the synthetic fabric of our clothing; microfibers come off in the wash and get swept into the ocean, destroying the planet one plankton-sized fiber at a time.

So I guess I’ll go frig off then, amrite?  If there’s nothing we can do, we may as well drown our sorrows in plastic microbeads and let Gen-Z worry about cleaning up the mess, amirite??

Again, nope.  Here are some simple steps I’ve taken to reduce my plastic consumption since reading this annoying book.  Would any of these fit into your own daily routines?  Together, we can save 0.00000000000007 sea turtles before we forget all about plastic and get angry about something else…

Another step that I have not personally taken is to buy a magical forty-dollar Cora Ball to catch microfibers in the wash.  Supposedly, it prevents a whopping 26% of microfibers from entering waterways…  Sounds not impressive — but if every household in the United States reduced their microfiber waste by 26%, that would probably save another two sea turtles.

This leads to my final point.  All of these measures sound like a drop in the bucket, or a single microfiber in the vast ocean.  Ultimately, major changes will need to be made by corporations and governments to reduce the world’s plastic output.  However, it’s better for an individual to do something than to do nothing at all.

At the beginning of the school year, my department supervisor sent all of the media specialists a video to watch called “I Will Be A Hummingbird.”  In the face of a raging forest fire, all the animals stand transfixed and helpless — except the hummingbird, who goes back and forth from a stream, pouring tiny beakfuls of water on the fire.  The other animals tell the hummingbird that he is too small to fight the fire; the hummingbird responds, “I am doing the best I can.”  The storyteller then says, “I may feel insignificant, but I certainly don’t want to be like the animals watching while the planet goes down the drain.  I will be a humming bird.  I will do the best I can.”

I may not be able to live up to Will McCallum’s admonishments to send all my plastic things back to the store with an angry letter, or Greenpeace’s disdain for recycling efforts.  But reading How To Give Up Plastic has made me more aware of plastic’s pervasiveness in my own household and gotten me started on reducing my plastic use.  A drop of water on the forest fire is better than nothing at all.  What are you doing to #breakfreefromplastic?  Leave a comment!

Learn more at BreakFreeFromPlastic.org and Greenpeace.

Alternative Control is donating half the proceeds from our Summer Sampler to Greenpeace — so far that’s sixteen dollars and thirty two cents.  What does that equate to in sea turtles?  Download some tunes today!