This might get filed under the heading #noonecares, but here’s what I’ve been reading recently… 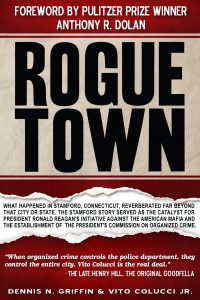 Vito Colucci Jr. is Stamford’s own Serpico, telling the story of how he fought the mobsters and corrupt police officers who ran this city during the 60s and 70s.  Colucci, a local cop, becomes an anonymous tipster for Stamford Advocate reporter Anthony Dolan, who is bent on exposing the misdeeds of city politicians and police who had gone to the dark side.  Living here for the better part of a decade, it was exciting to read about places I knew — and it turns out that that Colucci and I have at least one mutual acquaintance!  (Don’t worry, not a mobster.)  If you enjoy true crime stories, Rogue Town is an easy read that’s sure to intrigue.

Side note: The book mainly focuses on corruption within the police department, but it also touches on problems in City Hall.  This brings to mind exactly what the Reform Stamford folks are fighting against, fifty years after the events in Rogue Town — like the closed door “meetings before meetings” that they got rid of this January.  On one hand, way to go, guys!  But on the other hand, it’s sad that some things never change… 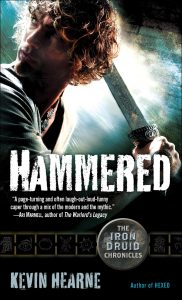 This light-hearted fantasy series chronicles the adventures of Atticus O’Sullivan, a two-thousand-year-old Druid living in modern day Arizona.  All he wants to do is run his indie bookshop and hang out with his loyal pup Oberon, but witches, fairies, and malevolent deities just keep getting in the way.  In author Kevin Hearne’s world, gods and goddesses from all religions and ancient mythologies exist — each pantheon lives on its own plane, but everyone can visit and interact with each other on Earth.  I just started the third book, Hammered (2011), which begins with Atticus’s mission to Asgard.  (Turns out Atticus can use his Druid powers to travel to other planes too.)  After just finishing up Neil Gaiman’s Norse Mythology, I’m curious to see how Hearne will characterize the Norse gods.  If you want to read something fun and campy while you’re waiting for the next book from Rothfuss or Martin, The Iron Druid Chronicles is one series to check out!

You can see that I’ve been doing a better job of reading “grown-up books” lately, but plenty of kids’ books are still crossing my path as well.  Second grade and kindergarten unanimously loved Last Stop on Market Street and Mango, Abuela, & Me.  I’m reading Book Scavenger along with a couple of fifth graders; it’s kind of making my head hurt, but they seem to like it.  So far, my favorite kid novels this year have been The War That Saved My Life and its sequel The War I Finally Won — tear-jerkers about a sister and brother in England during World War II, with enough character development and ambiguity to keep an adult’s interest.  I wonder if student readers will pick up on the reason Susan and Becky were estranged from their families…  Good selections, Nutmeg Committee. 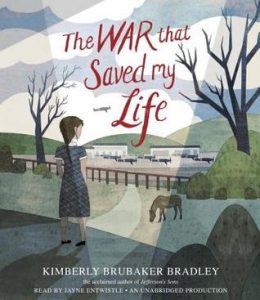 What have you been reading recently?