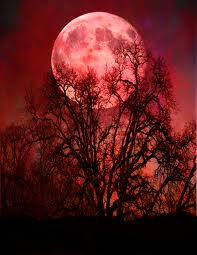 She had the moon in her mouth. It was a light that radiantly beamed from deep in her throat; a light that could impair any man’s mind into blind, incoherent pleasure. She was born with the talent. When she presented her show-and-tell at the front of her third grade class, all the boys would scratch at their jeans in desperate attempt to tickle their cocks. The moonbeams could squeeze through her teeth, roll of her tongue like waves and part her lips like opening gates of heaven. And much like admiration for the moon itself, every glance at her light enforced desire. Men’s brains would lean on the windows of their eyes and daydream on touching her surface, exploring her secrets, claiming her as their territory. And for a while, like the moon, she kept her distance. The source of her light remained as unreachable as that strange orb in the sky. Her parents took turns beating her. Every hit left a disfiguring crater. Knuckles bruised her body, killed the cells and drained the pigment from her skin. Even the brittle and feebly clenched fist of her mother managed to leave its mark, like so many tiny meteorites crashing into a defenseless satellite. Despite the abuse, the light inside of her drowned out the trauma. The blue beams hid the dents in her bones and the holes in her heart. Her illuminating presence masked the inner pain, like moon gazing reveals the craters as only touches of make-up to a beautiful thing – so seemingly smooth and perfectly lit.

When she came of age, she started sucking cock. A once unobtainable world came to Earth for bedroom visits. Yet, the moonlight in her mouth remained strong. Man’s desire for her intensified, now that their desires would be met. Finally, the lunar surface was theirs to spoil with their prints. She climbed through their windows and into their beds. Through her erotic grin would come that paralyzing brilliance. Then, when the men were immobilized, she would pump breath into their fantastical daydreams. She sucked cock like no other girl could. The warmth of her light glowing orange through her bloated cheeks, would ripple the shafts of their cocks with unheard-of sensation. But, the anticipation and the pleasure were always too potent. They all came within seconds, sperm silly-stringing across the walls. One small lick on man dick, one giant mess of mankind.

When she grew mature, she grew fond of murder. Men lost in blinding light and pleasure were always easy victims. Right before ejaculation, she’d bite off the upper half of their cocks. The penis stems left blooming with erupting blood and spurts of cum. Their screams too high of a pitch to be heard. Their expressions stuck in horrific contortion as the sweat dripped from every pore of their paling complexion. They’d reach out with their twitching hands in their sudden shock to touch her, and all they felt was the cold, hard lunar surface of her skin. With their blurring vision they came to realize the grayness of her body. In their final moments of consciousness they gained deep insight into her soul. The empty, lifeless and merciless conditions of a rock cratered with abuse as the ugly truth beneath the light.

The moon is in her mouth. A single light in the vacuum of space. A luring fantasy towards a disastrous truth. A wondrous world without air to breathe. Like groping in the dark until you find the welcoming lantern swinging within the cloak of death.