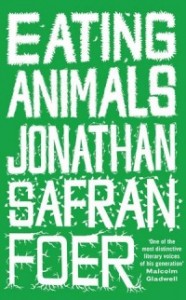 When I arrived early to a job interview at the Fairfield Public Library, I didn’t intend to get any books, much less one that would create a huge moral dilemma in my everyday life. The “One Book One Town” display stood in the middle of the lobby: stacks of Jonathan Safran Foer’s Eating Animals, on sale for $5 apiece. I’d read about the book in a Time article a week or two beforehand, so I picked up a copy and leafed through it to kill time.

Instantly, I was hooked. Foer opens with an anecdote about his grandmother, a Holocaust survivor and in Foer’s opinion, the world’s greatest chef. She hordes nonperishables, she cooks with the fattiest cuts of meat available, and her chicken and carrots recipe is second to none. Even when she was faced with starvation while running from Nazis, she refused to eat pork sausage because it wasn’t kosher. When Foer asks her, “Not even to save your life?” she replies, “If nothing matters, there’s nothing to save.”

Throughout Eating Animals, Foer uses his own life as a vehicle to discuss moral and environmental implications of — you guessed it – eating animals. He has sorted dalliances with vegetarianism beginning in college, to which his family reacts with bemusement; they never know if he will be still “be” a vegetarian when he returns home for the next school break. When he and his fiancée get married, they decide to stop eating meat – unless they’re at a friend’s house, or at a restaurant, or if they’re really in the mood for a burger. It’s not until his son is born that Foer starts to take vegetarianism seriously. Interspersed with the story of his own philosophical and culinary journey, Foer examines the impact that factory farming has on animals and the people who consume them.

Foer believes that it’s wrong to eat meat, but his book isn’t just a diatribe against carnivores. Yes, there are the requisite tales of animal abuse that occurs in the meat industry – but there are also chapters about organic farmers that treat their animals humanely, and even chapters on the perspectives of people who design and manage factory farms. Instead of railing against meat-eaters, Foer presents the consequences of meat production and leaves it to the reader to decide what he or she should do. Do you really want to eat sushi knowing that 26 pounds of cute sea animals are killed as collateral damage for one pound of shrimp? Do you want to consume a chicken has been pumped full of antibiotics so it could live standing in its own shit? And the slaughterhouse stories in the book are so sickening that I’m not going to repeat them here. Trust me, those stories will kill your appetite — after they cut off its nose and fuck it with an electric prod.

So back to that huge moral dilemma… Eating Animals didn’t convince me to become a vegetarian, but it has convinced me to stop buying and eating factory-farmed meat – which has essentially kept meat out of my diet since late April. Yes, I’ve fallen off the wagon a few times – a cheeseburger on Memorial Day, Dinner on a Stick Night – but I’ve also sat at Buffalo Wild Wings eating cheese fries and celery sticks, and ordered the pasta with tomato sauce at Giovanni’s Steak House. I found a farmer who sells humanely raised beef and pork — True Love Farms, Stamford Nature Center’s farmers market on Fridays, 10 am to 2 pm — and since he is young and handsome, I’m inclined to put faith in his pictures of happy pigs. But if I don’t make it out to see that guy on Fridays (impossible until recently), I’m left with tofu and veggie burgers.

I don’t know how long I can stay away from supermarket meat, and I certainly don’t have the moral fortitude of Foer’s grandma; Tofurkey tastes like shit and there are only so many times that a person can eat a portabella mushroom wrap. Plus, there are my “bad meat relapses” to contend with – what’s the point of eating happy meat most of the time? Is that the mealtime equivalent of only cheating on someone “once in awhile”? Should I eat meat at my wedding? Is it okay to de-pepperoni a slice of pizza and then eat it?

Don’t ask me — if I had all the answers, my band would be famous and I’d be writing for Rolling Stone. I do know, though, that reading Eating Animals will change even the most voracious steak-lover’s outlook on meat. If you want to know where your food comes from, read this book.