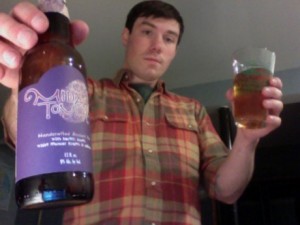 I cracked the mammoth book released two years ago, a hundred years after his death, The Autobiography of Mark Twain. And today I finally had the chance to actually get into reading it. It’s a fine way to look at life, the way that he decided to write about his. He dictated much of his autobiography to a stenographer while he sat in bed, freely thinking and remembering.

I am stuck with the thought now of how I should review the Midas Touch, of Dogfish Head out of Milton, Delaware. I mention Twain because he is in my head right now and I think that to relate an experience without care for making a definition, a true review will occur. Twain seemed obsessed with that in his attempts to write about his life, and since politics and literature go so good with beer, I’ll attempt, for just a little bit, to just be and drink and write about that.

First, I’ve meant for a while to try this beer. I’m not sure why I never picked it up, but assume it has to do with some instinct I have to wait for the right moment. The reason for the name is obvious once you see the beer. It’s gold, richer looking than a pilsner, and without the cloud of a tripel. I’m drinking it warm, at around 65 degrees Fahrenheit, and it tastes as English and Scottish ales will taste but with a sweet touch on the buttery notes. That’s the honey at work. The front of the bottle claims that this “Handcrafted Ancient Ale” was brewed “with barley, honey, white muscat grapes & saffron.”

It’s 9% ABV. But, that does not become obvious until the glass is near empty. Light and fluffy? No, this beer coats your throat and mouth with a light syrupy sensation that probably occurs from the honey. This beer is smooth.

The smell is subtle. The malts are not aromatic in the sense that you can smell the beer from feet away. It reminds me of bees, which I used to keep for years with my father, and it reminds me of the harvest period of New England life. When you harvest honey you start noticing its smells wherever you go because bees make honey from many of the plants around where you live. Or at least the honey I dealt with came from the pollen and nectar of flowering plants within a radius of my home at the time. I think it strange that honey doesn’t find its way into more beer, but beer is strange to begin with.

And this beer is available in certain stores. Like the Oaked Arrogant Bastard I reviewed, the Midas Touch won’t be on every shelf, but it should be easy enough to order.

It is pricey for a 12 oz beer. It goes for $3.00 a bottle, as a single. But worth the purchase if you consider that you could buy a Coors or Budweiser for the same price at a bar.

I give the beer 8.5 out of 10. I refuse to give it a 10 out of 10 only because I know that if I had a store of this beer I would go through it too easily, and therefore it’s dangerous. Delicious beer. Drink it carefully. I’m tempted to say that this beer is healthy, because I feel so damn good right now having finished the glass slowly over twenty or so minutes, but I won’t because I know I’d never be able to prove something like that.