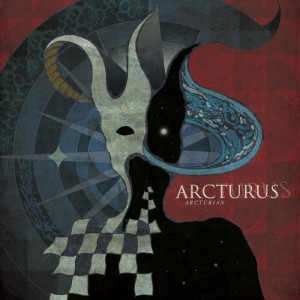 It’s been ten years since Arcturus has given us a gift. I call them gifts because to my ears, Arcturus hasn’t offered up a dud since their inception. Sure, Sideshow Symphonies was perhaps a bit too “normal” sounding. It was more like symphonic metal than anything else. But calling Arcturus avant-garde metal was a stretch to begin with. They’re definitely a unique and strange outfit. They present themselves in a clownish fashion, and their music is an interesting fusion of metal, classical, vaudeville and electronic influence. But nothing about them breeds a limiting audience. To be frank, they’re a lot of fun to listen to. An album like La Masquerade is the musical score to a demonic street carnival. The Sham Mirrors album goes well with a crash landing through a wormhole. It’s music that’s multifaceted and sometimes completely bonkers, but easily approachable. It’s no wonder then that the band’s been sorely missed. So has the long hiatus stolen some of the magic? No, absolutely not. Arcturian is the album fans have been waiting for.

For one, the band has taken special care to continue the production and mixing style used on their previous albums. This might be a complaint for many who were hoping the band would use this opportunity to beef up their sound. But instead of completely reinventing their studio identity, they repaired a few production flaws. They turned a muddy and tinny sound into something loud, uniform and whimsical. None of the instruments try to overpower or take the lead stage and all of the components work together to create one huge and glorious circus epic.

In this album and under the big top, orchestral melodies sweep and crash across these songs like mourning waves. The songs “Game Over” and “Archer” are two unhappier tracks that use that orchestral magnificence to bring bittersweet romanticism to doomier riffs. Electronic percussion and robotized vocals weave a strange pop sensibility to songs like “Warp” and “Demon”. The former track is like Depeche Mode meets Stratovarius, and it’s completely infectious. And though Arcturus is known more for their unorthodox sound rather than the extremity of their music, songs like “Angst” and “The Arcturian Sign” prove that the band knows when to turn up the intensity. A few aggressive black metal moments in these two songs harken back to the band’s debut and add even more depth to an already diverse album. If the alternative rock of “Crashland” and the coulrophobic wackiness of “Bane” haven’t sold you on Arcturus’ talent for the unexpected, then you haven’t let the album properly grow on you. I know I needed at least four or five listens before it clicked.

To be honest, I’ve never been too big of a fan of Vortex’s vocals. Vortex is great for quirkier moments, but his efforts to sound dramatic come off flat and cheesy. On this album, he sounds like he’s straining to hit some of the higher notes. Also, the awkward transition between his full voice and falsetto is grating and distracts from the music. I always thought Garm was better suited for the Arcturus sound, and I can’t help but feel like his presence would have pushed an already strong album into modern classic territory.

To sum up, I’m enjoying this release immensely. I feel like this is the best stuff Arcturus has come up with since The Sham Mirrors. It’s reassuring to know that the band hasn’t lost steam from a ten year drought and I’m excited for what’s coming up next. Arcturian is a summary of the past and a gateway into the monolith…and it’s filled with musical insanity.