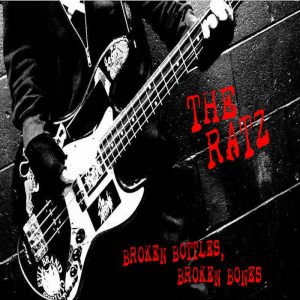 The album Broken Bottles, Broken Bones is completely raw jams, with definitive tones of the presumed-dead punk rock of the early 80s. In these uninhibited short anthems, I can taste a little Bad Brains, a touch of Ramones and a slathering Sex Pistols. Fuck you Johnny London, Donald Trump sucks!!

The Ratz formed in mid-2016, in the shadow of the members’ current band The Lost Riots.  Influences of their previous groups, The Danglers and Elvis McMan, are just under the surface as well.

The Ratz truly bring it back to the old school; they have the potential to expand on this release and make a real impact in the music scene in New England.

The Ratz are made up of these three lunatics:

Broken Bottles, Broken Bones, via Die Hipster Records, is the band’s first release. It was recorded in Cheshire, Connecticut at Bonehead Studio in late 2016 – early 2017. Released in March 2017, the album is available digitally as well as compact disc. Get it at www.theratz.bandcamp.com.

The Ratz are currently playing shows throughout Connecticut and have a split 7″ in the pipe lines with The Baby Sandwiches from Staten Island, New York on Xiao Wrecks Records.