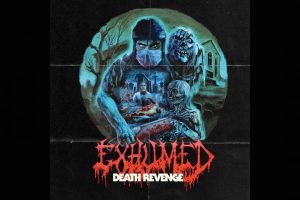 Through seven full-length offerings and enough demos and splits to fill a casket, San Jose’s Exhumed have proven to be nothing but reliable.  You see the bloody logo and you know what to expect.  Even as the band as progressed from the early grind ‘n slash offerings to 2013’s melodic death opus Necrocracy, the quality never wavered.

Their newest offering, Death Revenge, lives up to Relapse’s bill as the most diverse output to date, both conceptually and lyrically.  Based in 1820-era Edinburgh, Scotland the album tells a tale centered on murder, grave robbery, and corpse trade.  To that end, Matt Harvey and company meld prior elements of Exhumed – grinding speed, heavy riffing, and a dual-vocal attack – with orchestral pieces and segues befitting of a cinema score.  “Death Revenge Overture” spills into “Defenders of the Grave,” a track that leans heavily on Necrocracy’s groove thing, to kick off the record.  Through “Lifeless,” “Dead End,” and “Night Work” the band shift seamlessly between razor-sharp grinding and harmony-laden guitar prowess befitting Heartwork-era Carcass.  “Unspeakable” is a relentless, off-the-rails trip until the break hits and gives you *just* enough time to slip that neck brace on before hitting the groove.  “The Gravemakers of Edinburgh” offers more cinema-inspired respite, giving the listener a quick break before slamming into the crust of “The Harrowing.”

The big question here is ‘does this all work’?  The short answer is yes, yes it does.  Although the framework used to create the material may have changed, Death Revenge is still a ripping slab of crimson-soaked aural carnage.  Oh, to be a corpse behind the wall.

Review copy courtesy of Earsplit PR.  All opinions are our own.