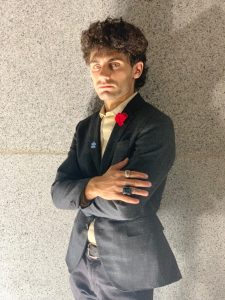 The latest in the inbox is max lee (lowercase intentional).  The New York experimental rock artist wrote and recorded his June 2018 album Colors of Noise by himself, a fact which he stresses in his press release.  Says lee:

“I recorded everything on the album by myself. I mixed it, mastered it, and released it all on my own – and nobody helped me do it. There were a lot of people who made it possible, don’t get me wrong, but to me that shows a something about the individuality and uniqueness that we all have, and that when you set your mind to it – anything is possible. Nobody can really stop you from doing what you want to do but yourself.”

Colors of Noise lacks passion, but there are some songs that have more staying power than others.  Take the short, grunge-inspired tune “where’s the garbage?”

A little later in the album, “how i feel” shows something like a groove with the guitar and keyboards:

So, max lee does show some flashes of potential.  Although he places a high value on the fact that he created this music independently, his next work might benefit from the input of others.  If lee focuses on his strengths and finds like-minded players to fill the other roles in the songs, his music could push beyond the bounds of his own imagination to make something with a broader appeal.