Death metal often walks a narrow tightrope. The lyrical themes can sometimes be too didactically political or, on the other hand, too cartoonish to take seriously. Musically, there is also a balancing act. Some bands who try so hard to sound relentlessly punishing can at times end up sounding monotonous and uninteresting.

Phylogenesis, the latest offering from LA death metallers Abysmal Dawn, walks such tightropes with grace and purpose. The word Phylogenesis itself means “the evolutionary development and diversification of a species or group of organisms, or of a particular feature of an organism.” And this is indeed a step in an evolutionary process for the band — a “rebirth,” no less, according to the press release. Abysmal Dawn have battled and ultimately come through various internal and external challenges in the six-year period since their previous effort, 2014’s Obsolescence. Phylogenesis can be seen as the band’s attempt to show the world that they are anything but obsolete. 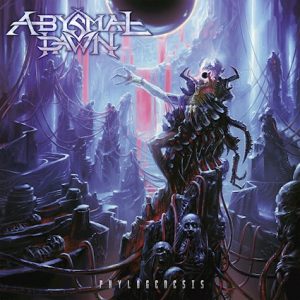 Opening track “Mundane Existence” begins in exhilaratingly defiant form with screamed line “Fuck you all!”: “the most heartfelt, ‘Fuck you, we’re still here’” according to singer and only remaining founder member Charles Elliott. The music is exactly what most Abysmal Dawn fans will want to hear. Some bands try to reinvent both themselves and the wheel with every release whilst others remain steadfast in the righteousness of their convictions. Abysmal Dawn seem to be in the latter category and they carry it off with determination and prowess.

The riffs might not be the most memorable or innovative you’ll ever hear, but their superlative delivery — with assured dynamic changes and ninja-precision — means they kick you in the teeth every time nonetheless. Production-wise, this album avoids many of the pitfalls of what Darkthrone’s Fenriz calls the “soulless plastic sound” of much modern metal. James Coppolino’s impeccable drums sound much more natural that most within the genre (although the quantized double kick drum sections will still sound unnecessarily sanitized to some ears). Elliott’s and Vito Petroni’s guitars are warm as well as crisp. Eliseo Garcia’s bass tracks stoically and unobtrusively underpin the sound. Elliott’s production and mix (assisted by Mike Bear) and Tony Lindgren’s expert mastering leave some very welcome breathing space so that the most powerful sections really own the aggression they project.

Lyrically, this seems to be an outpouring of enraged confusion at various ongoing mistakes and shortcomings of human individuals and societies. Elliott sometimes uses his words as weapons against at those who hold power and wealth (“You monetize obfuscation / I analyze your intentions”) and at other times seems to be lamenting his own personal demons (“Burning, yearning, seeking / Purpose to numb the pain of life”). His intensely cathartic death growls are as controlled as they are visceral. There are no mistakes here. We race at breakneck speed through titles such as “The Path Of The Totalitarian,” “True to The Blind,” “Soul-Sick Nation,” even a cover of Death’s “Flattening Of Emotions.” There are no surprises or unexpected twists and, for that reason, some will find that their emotions do indeed flatten as the album progresses. Others will see this as an unflinchingly honest death metal album for the 2020s. One that dares to be exactly what its creators intend.

The coronavirus crisis is in full force at the time of writing, and nobody knows what the post-virus world will be like or when it will even come about. Whatever we wake up to, music will still play an important role in keeping us sane whilst we rage against our oppressors. In the meantime, Abysmal Dawn’s Phylogenesis is there for us to scream along to if we need to as we punch into the empty darkness or pine for the light beyond its periphery. If you are a fan of solid, powerful and heartfelt death metal this artistic and personal rebirth could be exactly what you need right now.

Phylogenesis is available now on Season of Mist. Order here on vinyl, CD, tape, and digital.