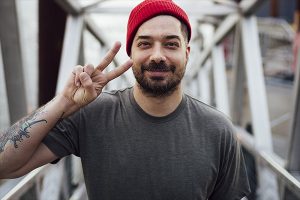 My knowledge of the hip hop world is somewhat limited. I’ve only gotten into the genre a couple of years ago. I thought for a long while that it was all about jewelry, gangs and girls. I couldn’t relate to it at all. But I also couldn’t help but feel like I was missing out on something great. So now thanks to the internet and a little research, I’m finally starting to realize hip hop’s artistic merit. I like weird music, and rap can be fucking weird.

Portland Oregon’s Aesop Rock has to be one of the weirdest rappers out there. His lyrics remind me a lot of my first attempts at surrealist poetry when I was a teenager. I remember my younger melodramatic self, scribbling imaginative bullshit in attempt to make as many metaphors as possible, exhausting the thesaurus vocabulary in my objective to be deep and unorthodox. It’s all very cringe-worthy. The difference here is that Aesop’s flow, rhyming, vocabulary and potent imagery is fresh, expressive and entertaining. The guy is an inhuman wordsmith. He can be perplexing to the point of hilarity. He can also pump a whole lot of sensible commentary through very esoteric statements. Beneath all the insane adjectives, hyperbole and nonsense lies very relatable personal stories about circumventing a fucked up world.

But it’s not just the lyricism that stands out. The instrumentation and production on all his releases is top notch. And personally, that’s the real reason I enjoy his albums so much. There’s a great deal of musical nuisance in his beats and unpredictability in his songwriting. Sometimes songs go through drastic time signature changes and mood swings without warning. For a few verses it’s all about old school party sampling, but then there’s that wild psychedelic flare, hardcore attack and industrial power.  Each document in his discography has its own flavor and personality. Every consecutive release feels like a higher level of perception and self-exploration. So if you want to get into Aesop the right way, it’s best to go chronologically.

Out of Aesop’s earlier works, this one has always stood out. The mix is unforgiving towards those who need their raps front and center. Aesop is almost drowned out at times by a psychedelic blender of synthesizer chimes, electric guitar and almost Middle Eastern flavors. It doesn’t help either that Aesop spits a dizzying amount of words per verse, making exact translation practically impossible. But I really admire just how seamless all the too-muchness blends together. It’s an album that comes at you like every individual sound of Times Square at once, making for a very immersive experience.

For those who don’t want to delve too far into things right away, this EP makes for an easier starting point. The production is cleaner than Bazooka Tooth, Aesop’s vocals are clear and loud and the instrumentation is more of a separated buffet of tripped-out flavors than a musical soup of wonder. Because of this the beats hit harder, groovier. Aesop is his usual metaphorical and exaggerated self, but he also infuses these tracks with infectious choruses. Each song has a memorable hook and distinguishing style. The EP as a whole is laid-back, cool and rolls easy over any couch-lazing listener.

What makes this album special is its fuzzy, hazy rock sound. Loud drums, a bit of guitar twang and a weird clipping “imperfection” in the mix makes for one of Aesop’s dirtiest records. Make no mistake, this is a still a rap album through and through. But the beats this time have a certain salty and bluesy groove that can be traced back to the crusty riffs of the 1970s. Jazzy horns, stabs of synthesizer and Aesop’s street philosophies keep things from becoming too retro, resulting in a great meeting of old and new school minds. Moments on this album are absolutely anthemic and rebellious, like a hip hop interpretation of Jimi Hendrix’s “Star Spangled Banner.”

This is Aesop’s most recent record and a personal favorite. In many ways, this is one of his most accessible releases. The rapping style here is a little scaled back and simplified, with extra emphasis placed on the emotional weight of each word. Aesop sounds particularly heartfelt here, cycling through various personal experiences scaling all the way back to his childhood. The instrumentation is bright, funky and colorful. The album plays like some kind of reality show confessional, stripped of pop culture phoniness and ignorance. Aesop Rock has shit to get off his chest. You’re going to lean against this grimy downtown storefront sharing a beer can in a paper bag, and listen to everything he has to say.