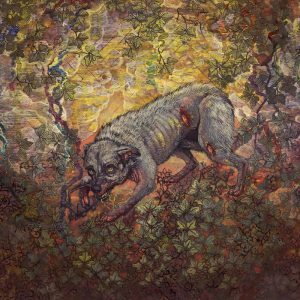 Pyrrhon is not your dad’s death metal band. Instead of playing with standard genre tropes, the NYC-based quartet broadens its sound with shots of discordant noise, angular riffs and odd time signatures. It’s as if you combined some left-field, mathy, noise rock band with a death metal band. The results are positively exhilarating as heard on the band’s most recent album,What Passes For Survival, released late last year by Willowtip. The band features the line-up of Doug Moore (vocals), Dylan DiLella (guitars), Erik Malave (bass) and Steve Schwegler (drums).

Since the band is doing a  mini-tour with Ehnahre this month that stops at Cherry Street Station in Wallingford on the 16th, we decided to send Moore some questions about their unconventional sound, inspirations for lyrics, their creative process and audience reactions. Below are his answers.

(Join the event here.  Local support will be provided by the miscreants in Disanimator and Hylda)

This is one show you won’t want to miss. C’mon down and get weird and heavy with the rest of us.

Pyrrhon is a death metal band, but a very non-conventional one. What made you decide to start this kind of band?

We didn’t really set out with the intention of becoming a super unconventional band. The earliest Pyrrhon compositions were basically attempts to mix the fusion-influenced sound of ’90s Floridian bands like Cynic and Atheist with more brutal rhythms of NY-area bands like Suffocation and Immolation. But as we spent more time playing together, it became clear that our creative instincts and diverse listening libraries were leading us in a more interdisciplinary direction. The sound we ended up with emerged pretty naturally from following our guts and trying our best to top our past work on every release. As for why we indulged those instincts instead of staying in more familiar territory: playing extreme metal is highly time-consuming and expensive, and offers little in the way of financial reward. The idea of making all the sacrifices associated with playing this music without trying to develop a unique and personalized sound in the process – “making the music we want to hear,” as they say –  didn’t make sense to us then, and still doesn’t today.

In addition, the lyrics deal with real world problems, instead of the standard gore and horror imagery. Why did you decide to go this route?

That’s just where my interests lie as a writer and reader. I enjoy horror fiction and love a lot of metal that traffics in that kind of imagery, but writing lyrics about that stuff would just feel like doing an impersonation of someone else’s obsession. (Plus, that material is played out to the point of meaninglessness after 30+ years of people drawing from that well.) If you’re going to spend a lot of your life screaming, it seems to me like you should choose something important to you to scream about, and so I try to write about subjects that have a strong emotional resonance for me. I’m certainly much more afraid of what I see in the newspapers every day than I am of any zombie or demon.

How does the band’s creative process work? Do you come up with the music first or the lyrics?

There’s a fair amount of variance in how individual songs develop, but the typical pattern goes like this: any one of the four members will bring in a rough sketch of a song structure, usually consisting of a bunch of guitar riffs (though our bassist Erik often composes on bass instead of guitar). We’ll then collectively workshop, rearrange, and elaborate on the material in the practice space. We frequently make detailed suggestions to each other, but ultimately each player has a fair amount of latitude to determine the details of his own contributions to the song. The exception is the lyrics, which I pretty much handle entirely myself. I usually have a bunch of very basic premises for lyrics bouncing around in my head at any given time. Once we commence to working on a new song in earnest, I choose a kernel that seems to fit the mood of the music and develop it into a full lyric iteratively as the song requires. This all sounds a lot more complicated than it really is. The TL;DR version is that we bang out the songs as a group while I write the lyrics on my own at the same time.

Has the band received any weird responses when playing with more traditional sounding death metal bands?

Yes, we’ve gotten quite a few blank stares while playing with more conventional DM acts. However, most death metal fans are just unassuming nerdy types at the end of the day, so I don’t think we’ve ever really been heckled onstage or anything like that. And there’s usually a few people absolutely losing their minds at shows where the bulk of the crowd is put off by us, so it’s not the kind of thing we really worry about too much.Do you prefer playing with other death metal bands? Or would you prefer a mixed bill, with different types of bands? What type of bands would your ideal bill consist of? Variety is really the spice of life when it comes to live lineups, at least for me. We’ve toured with death metal bands a number of times and enjoyed it, but since death metal sorts can be a little doctrinaire about style, we seem to generally do a little better on more diverse bills. The audiences at those kinds of shows tend to be more interested in novel experiences, rather than seeing a stock band regurgitate a bunch of genre tropes. One of the nice things about being in a band like Pyrrhon that doesn’t fit cleanly into a particular clearly-delineated subgenre is that we’ve gotten the opportunity to play with a broad variety of “genre” bands – be they death metal, grindcore, noise rock, brutal prog, or even harsh noise or free improvisation – plus lots of other oddball outfits. I’m not sure when we last played a super straight-ahead death metal show where we were “the weird band,” come to think of it. Our ideal bill is really just 3-4 bands that are each intense and audacious in their own distinct way. Genre and subgenre don’t really matter too much as long as you can feel the creativity crackling in the air during every set.

How does the band fit, or not fit into, your hometown of New York City’s, loud rock scene?

It initially didn’t feel like we fit in very well. None of us “grew up in the scene,” and there weren’t a lot of other really established weirdo death metal-type bands around when we formed, so it took us a few years to make inroads in the local music community here. (Most of the death metal bands that people think of as the drivers of NYC sound are actually based in Yonkers or on Long Island, and they’re mostly a lot older than we are.) But New York City has a strong tradition of weird, noisy, fearless music, both in the rock realm and outside of it, and we’re proud to be a tiny part of that lineage. Experimental heavy music really thrives here in a way that you don’t see in most other parts of the country, and we’ve found something of a stable community of like-minded musicians in that world if not in the straightforward death metal one.

What is next for the band?

We’re in the early stages of working on new material and will probably start live-testing a new song or two soon. We’re hitting the road for a weekend tour with Ehnahre (including Wallingford, obviously) in February, and for a longer run through eastern Canada and New England in March with Cleric from Philadelphia. More touring plans are in the works for later this year.

But most importantly, what is like voted Sexiest Dude In Metal?

At this point, it’s mostly an exercise in wondering when people will stop asking me about it in interviews!