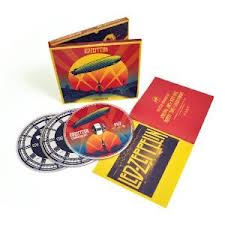 Last November, a mere five years after the fact, Led Zeppelin released a live CD (and DVD) of their London O2 Arena show from December of 2007.  Robert Plant had made it known prior to this performance that he was tied up with his present day musical projects and had no interest in touring with Jimmy Page, John Paul Jones and Jason Bonham.  This show was to be a one-off benefit concert and, consequently, the last ever Led Zeppelin performance.

It is no secret that Led Zeppelin is my original, hair-in-my-face-smoking-cigarettes teen favorite band.  When I heard that the recording of the live O2 show was to be released, I was giddy with flashbacks of my 13 year old self clumsily working out “Over The Hills and Far Away” on a broken down acoustic guitar.  I was pumped.  My Gods of hard rock were, apparently, alive and kicking.

My first taste of Celebration Day was over the radio, in the week before the official release.  I happened to catch “Black Dog” and “Rock & Roll”, which made me think the DJ was just playing it safe.  I wanted more.  I wanted to hear the songs that moved me.

About a week later, I told James I was going to drop $40 on the set.  I couldn’t remember the last time I laid down money on an album, but this was sure to be worth it.  Before I could log on to Amazon, he had the thing downloaded and burned onto a disc for me.  As soon as our daughter went down for a nap, I got into my car and hit the road so I could have a listen.  At this point, I just wanted to hear a preview, but was of course planning to buy the set because, well, it’s Led Zeppelin (and it comes in an irresistibly spiffy box).

I want to forget about this album, pretend I never said I would write a review, curl up into a ball with a pint of Haagen Dazs and move on.  But, one thing I know is that there is no hiding from the truth — and no amount of ice cream could cloud the fact that one of two things are true. Either I am not the fan I thought I was, or Led Zeppelin is not the band I thought it was, and both of these options embarrass me.

Positive reviews abound for this comeback album. People truly like it. Fans and music buffs everywhere are rejoicing, shelling out their hard earned money and swooning in a nostalgia that makes me question (more than usual) my own version of reality.  I love nothing more than getting swept away in something as visceral as good music, but that’s not what happened when I drove around with this album blaring.  I don’t care what the neighbors say; I consider Celebration Day an unforgivable offense.

I cannot comment much on the quality of the DVD, as I have not watched it in its entirety.  My general impression is that the sound seems better mixed on the DVD than the audio CD, but the video editing seemed a little all over the place — maybe there were 86 camera angles to try and heighten the excitement?  I’m not a huge video watcher, anyway.  I like my tunes in the car.

Anyway.  Back to the part about me wishing this album never happened.

BUT CIE, THESE GUYS ARE NO SPRING CHICKENS!

I know it.  It’s the first thing I said to myself when I heard how modified the vocals were on each and every song.  Robert Plant is 64 years old, and I can’t expect him to hit those notes like he did on studio recordings.  And, I have recently been reminded that he couldn’t even hit those notes decades ago.  So, he shoots a little lower.  Only like an octave lower.

What really ticked me off about the vocals is that Robert Plant’s voice is still great, and it sounded like he took the easy way out.  Part of his charm is that he strains — he shouts it out, he’s vibrant, he can’t be contained — and it sounded to me like he would rather choose a safe note than try for one that was almost out of range.  Personally, I’d rather hear his voice crack and feel like he was really in the moment.

Did he sound good? Sure.  Did it thrill me? Absolutely not.

At the end of the day, I don’t think the age excuse is a viable one.  Celebration Day came out on the heels of the Rolling Stones album that contained new songs (good ones, too).  The Stones are touring around that album with unstoppable excitement and sex appeal, FIFTY YEARS LATER.  They’re old and they rock.  I could also say the same for Bruce Dickinson and Iron Maiden — true professionals with incredible energy and passion for their music.

BUT CIE, IT’S A LIVE RECORDING.

Look, I’m not expecting perfection from a live recording.  Far from it, actually.

What I’m expecting is for it to sound like they had at least a handful of rehearsals prior to getting up on stage, putting out a box set, and squeezing the biggest cash-making mother of all lemons.  Jason Bonham sounded great on drums and really captured the spirit of his dad.  John Paul Jones was right on, in the pocket, and keeping time like a goddamn metronome, like always.

So my question goes out to Jimmy Page: What happened?  He missed cues, his solos were lousy and it didn’t sound like he cared enough to keep time, especially as the night went on.  He was mediocre and sounded like he lacked passion, which is my main issue with the album, generally.

A live recording practically gets a “free pass” in my book.  There’s a lot of leeway when you’re playing off the cuff, and any good fan will appreciate that.  When you consider the live recordings of a band like The Grateful Dead (is it OK to reference The Dead in a heavy metal blog?), sure, they messed up — constantly, as a matter of fact, and Donna was probably one of the lousiest vocalists of that era — but it was all good because the energy and spontaneity was there.  It just worked.

YES, my point exactly.  This is Led Zeppelin’s last ever performance — the one we’ve all been hoping and wishing for, the reunion that happened despite almost not happening, the show that everybody and their brother wished they had a ticket for.  This is the last Led Zeppelin show ever.  It should sound and feel like a thrill ride.

And, hey you, Record Producer Guy, how come no one bothered to make sure the sound was captured in a way that, ya know, sounds good? Or how about using some of that technology to fix it up after the fact?  I understand that Jimmy Page likes to have Jimmy Page’s solos highlighted, but did anyone consider the fans?

For as much as I love Led Zeppelin, I should have been blown away by the level of awesome.  I’m not saying this album was unlistenable by any stretch, but it’s not mixed properly, the band was off, and I don’t feel that Plant and Paige really gave it their all.  There should have been a lot more excitement for the epic nature of what Celebration Day represents to its fans.