Anyone who knows Lightsbane personally understands that the guys have a pretty modest and humorous view of themselves. Experiencing them live is always a hefty helping of great music with a little extra comedy thrown in to make the whole show more approachable. And in my opinion, if the local metal scene needs anything as far as live shows go, it’s to make the live experience a bit more approachable and memorable.

Bands can learn a thing or two from Lightsbane. Instead of staring at your shoes, introducing your songs as if you’re having a back-and-forth discussion with your bandmates about what to practice next, show a little passion and metal fortitude by sharing a graphically funny story pertaining to your music. Pull the crowd into your set with a joke, or a bit of humble self-deprecation. For fuck’s sake, do something other than try to wow people on sheer musical ability, because quite honestly, there are so many great local metal musicians out there. But there are considerably fewer bands that I feel can pull off a memorable show.

Lightsbane’s light-hearted demeanor sticks out, and that’s one of the reasons that they have such a draw. Their recent CD release party was packed wall to wall with people. Being in the unfortunate position of living and struggling to do the same in lower Fairfield County, I was quite impressed. Yes, Lightsbane is a success. That’s for sure.

But this article isn’t about Lightbane: The Live Act. This is about Lightsbane: The Music. And let’s face it, Lightbane wouldn’t be nearly as successful if all their strengths lied in their stage presence. The music has got to be great too, right? Well I’m pleased to report that the band’s debut album Controverting Irrelevance has solidified their rightful place as one of Connecticut’s best and most consistent metal acts. Let’s look into the ingredients of this album that make this a fact:

The Sound: Lightsbane is a metal band; a damn fine example of one. And what I mean by that, is that they’re quite content with picking from various heavy metal genres without straying into too weird of a fusion that would make them a little hard to swallow. Do you like thrash? Do you like death metal? Do you like melodic metal? Then you’re going to find a lot to like here. The band has found the perfect middle ground on which to build a multi-faceted extreme music machine. The machine functions at a stern, resolute pace. All of the instruments have weight, but don’t rely on a suffocating deep production to leave a pummeling impression. None of the instruments overpower the other, and all of them work in unison towards the end goal. The grinding gears of good old fashioned mosh music don’t tire here.

The Songs: I’m delighted that these songs are actually songs. These eight tracks aren’t mere collections of random riffs. There’s a narrative, and a repeating musical concept in each of these numbers that makes them sound like anthems. The melodic leads have a soaring, victorious quality and the chorus riffs instantly stick in your head. I only wish that they included a lyric booklet. The songs call for fist-pumping sing-alongs. On another note, the guitar solos and riffs have a wide-ranging quality, switching from being hopeful and uplifting to disturbing and doomy. Listening to the album front to back is like being privy to the thoughts of a soldier going off to war. There’s majorly melodic moments where you revel in the strength, courage and will that brought you to place that gun in your hand. Then there’s heavy, deathly moments of burdening fear, doubt and despair about the severity of your situation. You’ll either pull through triumphant or you’ll die in a blood y mess. Either way, you’re getting the fuck out there and fighting.

The Musicianship: The execution here is spot-on. You can tell the band spent a lot of time in the studio getting everything down perfectly. The solos offer a lot of flare, but also a lot of tasteful technique that shows the band knows when to ease from a little too much masturbation. The drumming is rapid, on-point and particularly impressive in various start/stop moments peppered throughout the album. And god damn, the bass is audible! This rare occurrence is welcome, providing a much needed foundation of doom that lingers below the action like the swirling fires of Hell awaiting the dying soldier. All in all this is an expected, but still impressive display of musicianship.

Is there anything more I can say? Probably. But it’s more important for you to help support Lightsbane by heading to one of their shows and buying this album for yourself. As a metal fan, I’m confident that you’ll enjoy it as much as I did. And it’s only about forty minutes long! You can play it once, and then play it again immediately. If you catch on to any of the lyrics, please send them my way, especially if they happen to be from “Dumpster Cat Thaddeus.” Those lyrics seem like something I need in my life. 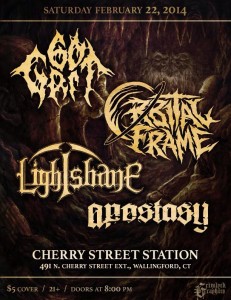