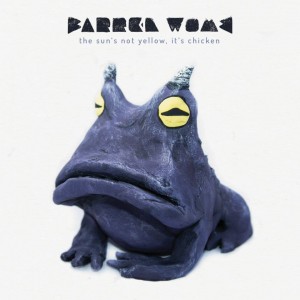 There is strange kind of loud rock happening in Norway these days. I’m not talking about black metal, which is what most people think of when they think of music from this Scandinavian country. Just look at the type of punk music that has come out of here in the past few years. There is the weird, noisy sludge punk of Arabrot along with the awesome rock/punk hybrid of Kvelertak.  Now Barren Womb has joined their ranks.

It seems like bands from this country like to dirty up their hardcore punk with hard rock sleaze, garage punk snot and even some filthy and noisy sludge. In the case of this raging duo, they take a lot of different influences and merge into one crazy, yet oddly coherent sound. You’ll hear traces of all the aforementioned genres mentioned above, that all played with a go-for-broke, punk rock viciousness.

In a way, they are part of a new wave of bands in Europe and in North Americas that are coming up with hardcore punk that rocks. In the States, we have bands like The Shrine, Hot Lunch and Lecherous Gaze (who all record for Tee Pee Records) holding it down, while in Canada there is Burning Love who record for Southern Lord, and in Europe there is their fellow countrymen in Kvelertak helping to spread the punk n roll gospel.

The opening song, “Kill Hicks” sets for the genre splicing to follow. A cascading riff gives way to a brawny punk riff, while lead singer/guitarist Tony Gonzahl screams his head off, before finding time for a wah-wah pedal abuse in the solo.

“Evil Prevails” alternates between noisy garage rock and beefy punk rock riffs, while “Only RainMan Doesn’t Change” is short, fast and sweet. “Nabrok” throws in some melodic singing to go along with the punk rock shouting and even has a ripping solo rise from the muck. “Obi Wan Chernobyl” features drummer Timo Silvola beating his kit to an inch of its life, while “Live Fast, Die” does just that. The awesomely titled “Assmasters Of Reality” has some nasty guy bucket riffs and some cowbell abuse. “Nexus Diplomis” is lurching, noisy rock.

Barren Womb has created a corker of a debut, which is likely to raise their profile outside of their native country. It’s brash, loud and rocks ferociously. What more could you want in an album like this?