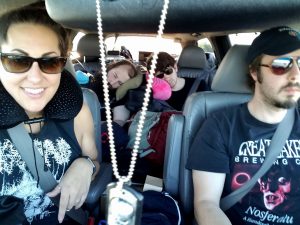 New York City’s Couch Slut play a highly confrontational style of noise rock that has garnered them praise from both critics and fans. The band, which features vocalist Megan Osztrosits, drummer Theo Nobel, guitarist Kevin Wunderlich, and bassist Kevin Hall, released their sophomore album Contempt late last summer. The new album was another scabrous dose of invective, making it a worthy follow up to their infamous debut, My Life As A Woman, which featured a graphic cover by artist Leandro De Cotis.  In addition, they are feral and dangerous in the live arena.

…And they’re coming to Connecticut. Yup, they’ll be playing the Pacific Standard Tavern in New Haven this Friday (1/12/18), with Intercourse, Grizzlor, MouthBreather and VideoDome. Don’t bother to question whether we are worthy of such a show — just go. This is one stacked line-up.

Below follows an interview with the band.

When it came time to record Contempt, what were you trying to accomplish? Did you achieve your goal?

Kevin Hall (KH):  I think our overriding goal was to produce recordings of the songs that did justice to the strength and vision of the material, and to truly see everything through to the end.  I think we are all very pleased with the result.

Theo Nobel (TN): With the exception of perhaps one or more of us.

What were you trying to convey through the music? The lyrics?

TN: Something along the lines of disdain or maybe scorn. The correct word eludes me at the moment. But you know, they’re pieces. It may be inappropriate to spoil your enjoyment of the work by discussing it ourselves. That’s for critics to do.

What about through the artwork? How did you get Leandro De Cotis to draw another cover?

Do you view the band as band as confrontational? Why or why not?

MO: We are very jovial and approachable people.

Contempt has garnered quite a bit of accolades. Were you surprised by this?

KH: I guess I am a little surprised that people can tell when someone has put a good piece of meat on their plate rather than a slop of shit.

The band is also known as a very in your face live band. Where do you think this comes from?

KH: My suspicion is that people are steeped in passive forms of entertainment.

What made you decide to cover Steely Dan for the recent split release with Microwaves?

TN: We’re unanimous in our respect and admiration for The Dan, but our agreement there is just one of the things that makes them unique to us. Their music has accompanied us in some odd and special ways. The night that we moved into our first practice space, for instance, we went to a party where “Rose Darling” was playing. Kevin Hall and I wound up singing along together, so we were singing Steely Dan together before our first real rehearsal. Some time after that we saw them perform Gaucho in its entirety at the Beacon Theatre with our good friend John. If you hunt down pictures of our first jaunt into Canada with the great Pyrrhon, you’ll notice that Kevin Hall didn’t change his shirt once in three days, and that shirt says “8 Miles To Pancake Day.”  Anyway, I used to listen to Gaucho all the time while on long drives through cold nights. I love all their albums, but I’ve always found Gaucho to be really intriguing.  It’s an unsettling record of rare and exquisite beauty. When I listen to the title track, I still can’t believe what I’m hearing. At one point it dawned on me that “Babylon Sisters” would translate well into our noisy rock idiom, so we set about arranging it and the results made us happy. We wanted to do something adventurous to accompany the Microwaves side, because they’re a risk-taking band that we respect and admire. We’ve only performed the song thrice: twice at St. Vitus in Brooklyn and once at Gooski’s Gas Chamber in Pittsburgh. That was an excellent show with Night Vapor and the venerable Taphos Nomos.  We were going to perform this past September while we were on tour, but Walter Becker unexpectedly passed away on one of the first days out and we just didn’t have the wind in our sails. Life is unreal – that’s the answer your gold teeth reveal when you throw them out and see how they roll.

How do you think the band fits into the NYC loud rock scene? If it does.

What is next for the band? Can we expect another album? More touring? 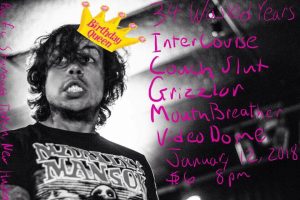