There’s a new feather in my side hustle cap: pizza delivery girl.  You know what the best thing about delivering pizzas is?  The tips.  And the second-best thing?  The fact that you’re getting paid to drive around listening to music.

The first burned disc to go into the CD player this Saturday was Seven Scrolls from BCAD (2017, No Visible Scars), or at least the A side of the album.  In BCAD, Vestal Claret collaborators Simon Tuozzoli and Phil Swanson marry their occult metal sound with an irreverent dose of 80s punk — imagine Vestal Claret, but it’s not about killing neighborhood children in a ritual sacrifice (or is it?), and you can have a circle pit.  Phil has a great sneer in “Thanatos,” and the thrashy riffs in “No Hope” had me pushing the speed limit and rolling through stop signs without coming to a complete stop.

Seven Scrolls is available for name-your-price download at No Visible Scars, or you can purchase the cassette for $6 — the B side features five covers that reflect the project’s inspiration, like Warfare’s “Metal Anarchy.”  Gonna have to burn that for my shift next week, stop signs be damned!  And stay tuned to Vestal Claret’s Facebook page, a little bird told me there might be some news from them soon…

Next up was Myrkur’s much-lauded 2017 release, Mareridt (Relapse).  Myrkur’s music is wandering at times and driving at others, immersing listeners in their own personal movie sound tracks.  Let me tell you, when you’re listening to Myrkur, you’re not just delivering pizzas — you’re bringing Waybread to a band of weary travelers, so they may continue their journey to destroy the Ring of Power in Mordor’s flames.  The fate of Middle Earth, er, North Haven depends on this large pepperoni.  The only track that threw me off was the closer, “Boernehjem,” because it had this creepy little girl talking about demons; I might be displaying my ignorance here, but I didn’t get the reference and how it connected to what was going on in the rest of the album.  (Maybe that’s because I was too busy imagining Lord of the Rings…  But now doing a little Googling, I see that the title of the song means “Orphanage,” which makes more sense with the creepy little girl.)

But never mind that!  Onto Corrosion of Conformity, who released No Cross No Crown just days ago on Nuclear Blast.  In his interview with Alternative Control at Psycho Las Vegas in August, COC drummer Reed Mullin said that Deliverance fans would like this album — and indeed, No Cross No Crown serves up the Southern metal sound that many COC fans love.  One of my favorite tracks so far is “Forgive Me,” which has more of a classic metal sound with its harmonized guitar runs and distinctive bass line. The title track is a departure from the band’s usual riffage, invoking the album’s religious themes with spoken word and chants over a hypnotic, creeping guitar line.  COC fans will not want to miss this album, the first to feature Pepper Keenan since In the Arms of God in 2005 — and visit COC’s website for tour dates, they are coming to our region soon!

(Side note: I get that Pepper’s vocals among the most recognizable in metal and that people love the “Pepper versions” of COC.  But I saw them perform as a trio in 2014 without having any reference for their music aside from Deliverance, and they blew everyone else off the flippin’ stage.  Just sayin’…  While Pepper is an important part of COC, he himself does not make the band.)

The last CD I listened to on my epic journey was the It’s Your Fault EP from Kings and Liars (self-released, 2018).  I have to admit, I did not listen to this whilst delivering apizza.  I attended the Yearly Winter Rumpus down at the Frog Hop after work (which it turns out was also Kings and Liars’ CD release party), and a nice lady at the merch table gave it to me for free.  Looking at the back of it in my car, I realized that Kings and Liars has the same lineup of Jamey Jasta’s backing band, minus Joey Concepcion; listening to the music, though, that factoid is kinda irrelevant.  This New Haven outfit, featuring Paul Chasse on lead vocals, musically has nothing to do with Jasta.  They channel 90s hard rock to create their own modern, riff-heavy sound; the backing vocal arrangements add an extra layer of interest.  The ballad “I’ll Be Seeing You” is the only moment of respite on this hard-hitting EP.  These guys will be a good companion to BCAD on next week’s delivery soundtrack!

And that’s a wrap, folks.  If you order from Apizza Grande North Haven and a beat-up green Corolla squeals into your driveway blasting heavy metal…. Make sure you’ve got cash for a good tip! 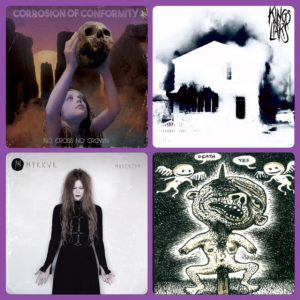