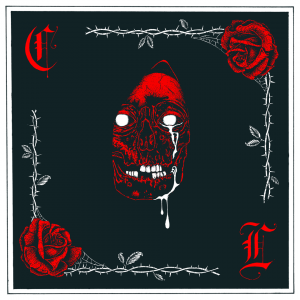 Cult Leader play dark and intense hardcore punk that can be chaotic and bruising, but also contemplative and brooding at times. This is evident on their new album A Patient Man, which came out in early November on Deathwish. While the album contains blasts of their patented sound, with songs such as “I Am Healed,” “Isolation In The Land Of Milk And Honey,” and “Share My Pain,” it also offers four brooding, gothy, mini epics in the songs “To: Achlys,” “A World Of Joy,” “The Broken Right Hand Of God,” and the title track, which show them broadening their musical horizons to great effect. Vocalist Anthony Lucero shines on this record. We all knew he could growl with the best of them, but he also proves he can really sing, getting his Nick Cave on in a big way. The rest of the band, bassist Sam Richards, guitarist Mike Mason, and drummer Corey Hansen, match him equally in being able to switch between the heavy tracks and the brooding ones without missing a beat. They have really stepped up their game.

And guess what? They’re coming to Connecticut. They will be playing the Webster Underground on December 5 with the equally awesome God Mother and Primitive Weapons, along with local bruisers Values. Since the gig is imminent, we decided to send Lucero some questions in order to get the lowdown on the new album, his lyrics and the artwork, among other subjects. Below are his answers.

(Don’t miss this show. It’s a chance to see four killer bands, that you would rarely see around these parts. You’ll regret not going.)

What were you trying to express on A Patient Man, both through the music and through the lyrics?

I believe the purpose of heavy music is to express negative energy and emotion.

The new album features your patented chaotic hardcore, but it also includes four brooding, dark epics. What made you decide to go in this direction? Is this something you plan to explore further in the future?

We didn’t approach the writing of this record with the idea that we would have a certain amount of songs of one type or the other. These are simply the songs we wrote and they fit under our umbrella of what we consider to be heavy music. In the future I’m sure we’ll approach writing the same way so we’ll just have to see what happens.

I’m curious about the songwriting. How was the album put together? What is your creative process? Do the lyrics come before the music or vice versa?

Our songwriting process is a collaborative one, everyone contributes and everyone has veto power. The lyrics rarely come before the song in any traditional way. I always have bits and pieces of lyric ideas written down but since our songs structures are so odd I usually wait until I have the skeleton of the song to start weaving lyrics into it.

The lyrics tend to paint a very dark picture of the world. How important are the lyrics to the band? Are they an expression of your inner person?

Yes the lyrics reflect my view of the world. They’re as important as any of the other instruments when creating a larger cohesive piece. And like the rest of the songwriting process the whole band has the opportunity to give their opinions on them and things may be adjusted accordingly.

What made you decide to use Kurt Ballou again for the recording of A Patient Man?

Kurt is a great friend and engineer, he understands our band and we enjoy working with him.

The artwork is a visual extension of the lyrics and tone of the music and I create it with the goal of further capturing the feeling I get from our music.

As a follow up, what do you get out of creating the artwork? Is it an itch you need to scratch? Do you get a different satisfaction from your artwork than you get from playing music? Or is it the same?

The feelings of creative satisfaction that come from making different types of art are all rewarding in their own way. I am very driven to create in any form I can and I’m lucky that within the structure of our band I can explore many different artistic directions.

How do you feel A Patient Man fits into the artistic progression of the band?

I feel good about it, as a band I don’t think we would make anything if it didn’t feel like a progress so the goal is always to push ourselves and we’ll continue to do so.

Don’t miss Cult Leader’s Connecticut appearance at the Webster Underground on December 5th.  And for more from Alternative Control, find us on Facebook, Twitter, Instagram, Soundcloud, and bandcamp.