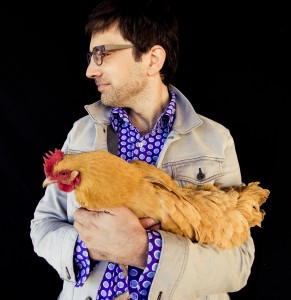 With his ninth album Dynamite Bouquet, Guy Grogan serves up a slice of groovy pop rock that harkens back to the good ol’ 90s.   His PR company lists Nirvana as a comparison, but I heard a lot more Weezer in the riffs and vocal harmonies.  The Santa Fe singer/songwriter recorded all parts of the album himself and sent it to Jono Manson at Kitchen Sink Studios for mixing and mastering.  The end result is ten sensitive, relatable tracks that have a broad appeal.  Plus, a chicken in the promo picture?  This dude is in.

My favorite was probably the most high-energy song on the album, “Metafixation.”  It brought me right back to the Pinkerton days of hanging around the local coffee shop until it was late enough to hang around the local diner, and repeat.

I would have liked to hear more of “Metafixation”‘s intensity on the rest of the album, but I also enjoyed the softer songs like “Moonbird.”  Grogan’s jazz influences show in this one’s solo as well.

Overall, children of the 90s who are looking for something relaxing and thoughtful — but not boring! — will enjoy Dynamite Bouquet.  For more from Guy Grogan, find his music on bandcamp, Soundcloud, and Reverbnation.