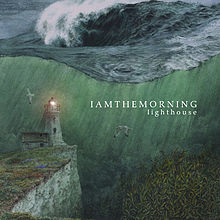 Iamthemorning is a duo from St. Petersburg, Russia, consisting of singer Marjana Semkina and pianist Gleb Kolyadin. A talented collective of guest musicians joins them on their third release, Lighthouse. And it’s an absolutely beautiful collection of progressive chamber rock.

All I can say is, “wow.”  It’s been a while since I’ve heard a record that satisfied my adoration for pastoral singer/songwriter music and folkish prog. Lighthouse provides the same emotional gratification I get from records like Nick Drake’s Pink Moon and Genesis’ A Trick of the Tail all in one 48 minute aural walk in the woods. It’s an album that’s as mysterious, flowery and pagan as a faded spell book half-buried in the dirt, and I’m lucky I follow Kscope records close enough to find it.

The music reminds me a lot of springtime. It’s chilly, hopeful, beautiful and melancholic. And even though the whole album is uniform in mood, these songs still manage to surprise, crossing genre lines from chamber music to a cappella to folk and even jazz. No matter what musical style surfaces, you’re still enveloped in the same sort of enchanted scenery – a sad, moss-ridden castle abandoned in a secluded valley of drizzle and wildflowers.

Lighthouse sounds as if it has a tremendous heritage. It’s like these songs have been around forever, shared around olden Russian campfires and as lullabies heard amidst the foggy ocean view bedrooms of impoverished Baltic seashore homes. The mellowness becomes very frail and fluttery at times, almost like strands of music stuck to cherry blossoms that would break in a stiff wind. But when the volume is raised, the drama can reach into Nightwish power ballad territory. The group can pull at emotional strings with barely any traditional methods of loudness. Grand piano, violin, harp and xylophone instrumentation can handle all the peaks and valleys of expression these compositions call for, although traditional rock guitar and drums do make their appearances.

Gleb is no slouch on the piano, filling in each measure with all sorts of fluctuating notes and unexpected time signature changes. But Marjana often steals the show. Sometimes she’s singing longingly in a flowered garden in the 1800s, waiting for a white-wigged prince to take her away on a fairytale. Other times she’s lost in the woods, cloaked in a witch’s ritual robes and twirling in the trees. The duo brings baroque loftiness and freeform spirituality to a balanced musical foundation that minds its proper manners as much as it thoughtlessly careens through the speakers.

This is the most beautiful piece of music I’ve heard so far this year. Everything about it screams ear candy as far as melody, musicianship and subtlety is concerned. It’s also very easy to listen to. The songs aren’t long at all and there’s nary a pointless moment of ambience to be had despite the albums existence in a very rich sonic world. And if you make listening to music as much of an emotional undertaking as I do, I wouldn’t be surprised if you get a little misty-eyed listening to songs like “Belighted.”  It packs quite a wallop of the “feels.”