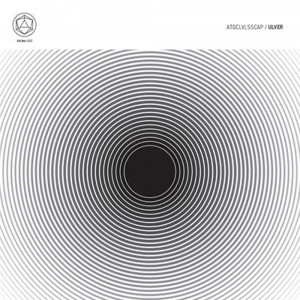 Ulver: the mighty shape shifters. Black metallers turned electronic artists turned classical composers have once again reinvented themselves into…a jam band? Yes. They’re back and have once again left genre classifiers scratching their heads. They’re the musical collective that won’t stand still and I love them for it. And they haven’t let me down this year either.

What we have here are a dozen tracks recorded at a dozen different venues from Ulver’s recent European “free rock” tour. Band member Daniel O’Sullivan took these recordings and assembled them together in a streamlined fashion to create a single 80 minute work that showcases Ulver’s improvisational skill. Normally I don’t really go for live albums. The sound quality and performances are often times underwhelming. But this album is not your typical live document, not by a long shot.

This doesn’t even sound like a live album. There’s no crowd noise and a great deal of studio magic must have went into making this sound so clean. The transition between tracks is seamless and there’s nary a sour note from both the instruments and the rare occasion that we hear Kristoffer’s deep and soulful voice. Bravo on the production. If there’s anything I want in a live album, it’s not to know that I’m listening to a live album.

ATGCLVLSSCAP (a title that features the first letters of the twelve signs of the zodiac) is a live album like Pink Floyd’s Ummagumma or Hawkwind’s Space Ritual. It showcases the raw, anarchic and experimental power of the band without the constraints of disciplined songwriting. And much like the aforementioned albums, the result is enveloping, psychedelic, cinematic and just a bit psychotic. It’s an album that shows just how deeply emotional, imaginative and unpredictable of a band Ulver really is.

They can entrance you with gothic drones like in “Gold Beach”; pull you along a space rock groove in “Cromagnosis”; send you off to dreamland with “Ecclesiastes (A Vernal Catnap).”  They hypnotize your senses with phantasmagoric pagan chants to a monkey god in “Om Hanumate Namah” and spin you down an ill-tempered depressive spiral in “Moody Stix.” They place you in a therapeutic synthesizer bubble in “Desert/Dawn” and position you right in the middle of a doom metal ritual in “Glamour Hammer.”  I can go on and on with the analogies. There are so many different facets to this music. Sunn O))), Tangerine Dream, King Crimson, Brian Eno, Can, and Mogwai are a few of the many musical acts that Ulver pay unpremeditated tribute.

The most impressive part is the improvisational nature of these pieces. The band got up on stage and started plucking and pushing and banging on different things and ended up creating something monstrous and beautiful.  The band either manipulated and built upon a certain established Ulver song or concocted these pieces out of nowhere. And despite the variety, Ulver never loses its identity – music as dark and as oppressive as it is transcendental and emotionally rich. These twelve pieces are sentimental moments in David Lynch films, pins and needles in the soul during prayer in a torch-lit temple, a kiss between lovers as they float about in the voids of space. It’s truly an album to get lost in, and one of the best live albums I’ve ever heard.