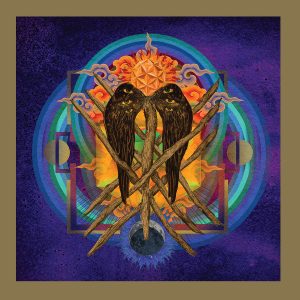 I’m greatly relieved by Mike Scheidt’s improved health. I remember it wasn’t long after my interview with him back in March of 2015 that he was overcome by a terrible affliction that almost killed him. He’s a super nice guy who’s very passionate about his music. He has a very likable and easy-going personality that laid out evidence of a somewhat sensitive soul. Characters like him should be appreciated, celebrated and perhaps respectfully imitated by others in the heavy metal genre. His modesty, talent and genuine attitude are a welcome respite from everyday human egoism.

Then of course there’s the music of YOB, which also thankfully continues with their new album Our Raw Heart. After an understandable four-year hiatus, the band comes back with their most melodic and emotional record yet – eh, well, melodic for doom metal at least.

Our Raw Heart sounds like it could be the soundtrack to Mike’s medical struggles. Writhing and plodding jabs of guitar in the song “In Reverie” strike and swing, strike and swing, like the consistent looping anxiety of intense stomach pain. Mike wails in plea over the curdling din.

“The Screen” is filthy and off-kilter, with dribbling heaviness for the majority of its duration. The tempo is sluggish and thick like new blood squeezing through the scab of an old, once terminal wound. It has the stench of defeat all over it.

“Beauty In Falling Leaves” climbs the same impassioned heights as “Marrow” from their previous album, although with the aura of a dirge. This touchingly melodic and melancholic piece stretches, rises and cascades into an epic doom ballad reflective of what I interpret as great sadness over a dire situation. Yet as the ten-minute mark approaches, a sudden dynamic shift happens and the song settles into optimism and courage. A dire situation has turned a corner and there’s a chance of recovery.

The title track, with riffs glowing in relief, health and spirituality brings this album to a positive conclusion — a rarity in doom metal. The ending is all the more effective when the personal struggles and happy endings of those who made this music are considered. The music here isn’t fear, pain, sadness, hope and relief for the sake of making something with emotional depth. This is music that both celebrates and condemns an intense real life experience. And so I believe that Our Raw Heart is a powerful tool — a talisman of sound passed down from Mike and the band to aid us in our own dire time of need.

Stream the entire album at NPR and check out Baldwin’s 2015 interview with Mike Scheidt below — “If the songs aren’t enough, we’re not doing our job.”