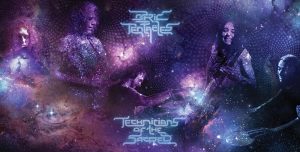 I was a huge fan of Ozric Tentacles in my younger years. Their sound was true, escapist wonderment. No message or moral or artistic stance other than epic and tripped out music for its own sake. Progressive rock aspects of the band harmonized with my musical interests at the time in bands like Yes and Pink Floyd, and their flirtations with jam rock, dub, reggae, and funk pulled them away from the pompous sophistications of prog towards the liberal sounds of drug culture. They were my perfect mix of highbrow and rebellion. They were one of my favorite musical acts.

I lost touch with them for a while, simply because my musical tastes were going somewhere else. I hungered for music that was a little more unpredictable. In the latter half of my 20s, I wanted deep analysis in my music. The Ozric Tentacles were too dependent on a kind of musical coloring book; an immense color palette to work with but too many bold lines to follow. 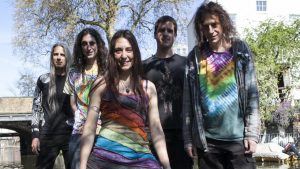 There was nothing secret or complicated about what the Ozrics were doing, and there still isn’t. But here I am in my 30s, and sometimes I just get tired of the arduous concentration that metaphorical music puts me through. Once in a while I just want to throw something on and bob my head and not have to think about anything. Of course that doesn’t mean I don’t want music to be creative or “out there”. So I’ve rekindled my admiration for the band. And 30 albums or so and 30+ years into their career, they haven’t slowed down or deviated from their extraordinary sound.

Back in my teens, I would go over my friend’s house to smoke some weed and hang. And every time, an Ozric Tentacles album always seemed to make it into the playlist. We’d lie on the floor in front of the stereo with our hands grabbing at the air, trying to reach out and touch their music, no doubt looking like complete morons to any sober witness. I thankfully don’t go through those rituals anymore, but my head does that same sort of motion mentally – it wanders in a psychedelic mix of cosmic experience and ignorance. I lose myself in it because it feels great. No psychedelics necessary.

Trippy, danceable, high-energy with a new age gloss. That’s the Ozric Tentacles. An instrumental tour de force that hasn’t changed much at all through the decades, because there’s nothing about the formula you need to fuck with. They have a solid understanding of psychedelic culture and fantasy, portraying both accurately through bubbling, soaring, storming, coasting, pulsating electronic keyboard and electric guitar workouts. A tight bass guitar, drum and occasional ethnic percussion rhythm section keeps it all in a danceable groove. And despite their almost static stance on musical evolution, they don’t get boring for me. I can listen to this stuff all day.

On a deeper level, this music connects me to nature with minimal effort. While embracing the technological and digital age of music making, they retain a remarkable environmental and astronomical value in everything they play. The Ozrics are all about mountains, oceans, gardens, a perfect view of the stars on clear nights underneath the swaying palm trees and pondering the orbits of alien planets while sipping on herbal teas; real hippy dippy shit. And sometimes I just need that kind of positive vibe in my life. Sometimes I want to just visit a Japanese Zen garden and look at some birds. Ozric Tentacles can subconsciously provide me that escape.

Here are four of my personal favorite albums with a brief explanation of what to expect. Because of their uniformity of sound, there’s really not much to say about each individually. But here it is:

This is a good starting point. At least it was a good starting point for me. This is their second album, before electronica started making a real impression in their sound. It features psychedelic rock epics, middle eastern jams, African ambience and even a little reggae. It’s a very organic and earthy sounding record.

This album has similar traits to Erpland, but with a more astronomical vibe. Space rock and space funk and space flute music and space everything else. It’s a very consistent record with great balance between hard rockers and mellow strangeness.

This is where the Ozrics begin to introduce trance and techno influence into their sound. I love how glossy and tripped-out this record is. It’s pretty, with tons of danceable energy and lots of groove. The song “Waterfall City” is eleven minutes of pure psytrance bliss.

Technicians Of The Sacred

This is their most recent offering. It’s a mammoth-sized double album and a return to form after a couple mediocre releases. The electronic gloss is trimmed back a bit, but still fills in the spaces between notes with musical fruit punch. I find it to be immensely entertaining, but it’s a long journey through a tropical, parallel dimension.