Omnium Gatherum happen to be one of my favorite melodic death metal groups. The reason for this is pretty simple, even if it goes against my usual listening habits. There’s nothing strange or even original about them. They’ve arguably been pumping out the same sort of encyclopedic melodic death metal since their inception. Yet despite their predictability, they have undeniable stamina and enthusiasm for what they do. They’re loud, heavy, melodic, and catchy. Frankly, they’re a fucking blast to listen to. Their latest album Grey Heavens is no different. In fact it may be their most enjoyable release so far. 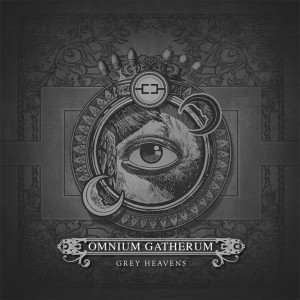 r previous two albums draw from darker and melancholic inspirations, Grey Heavens brings back the speed and optimism found on The Redshift, but with a more well-rounded and flashy touch that comes with being a more seasoned band. The melodies are bright, bold and upbeat. The heavier moments are tight, thrashy and convincingly pissed-off. This album has those simple but effective happy and angry dynamics that melodic death metal is based on, but with a re-energized spirit.

“The Great Liberation” is a highlight, with an awesome superhero-to-the-rescue kind of melodic energy. However, its richness is checked by its attitude. As pretty as it may sound, it rips and blasts the entire time in a head-banging frenzy. Many other tracks like “Frontiers,” “Storm Front” and “Rejuvenate!” follow a similar formula, but it’s a formula that I don’t tire of.

There are other times that the band chooses to hit you at a deeper level. Occasional doses of gothic despondency in epic tracks like “Ophidian Sunrise” and “Majesty and Silence” prove that the band can be equally effective when they lessen their pace. These tracks are gigantic, touchingly dramatic and strikingly beautiful.

Everyone in the band shines on their instruments. Vocalist Jukka Pelkonen has gotten better and better at integrating his beastly and hard-hitting growls into Omnium’s melodic tendencies. For the first couple of albums he seemed out of place and unnecessarily ugly in tone. But with the help of a cleaner production and a cohesive mix, he’s finally at the point where his vocals blend effortlessly with the music. The guitar solos are superb and as elegant as they’ve ever been, straddling the line between being tuneful and technical. The drums and bass guitar aren’t overly fancy, but serve as the backbone to Omnium’s plentiful amount of energy and power. And as always, keyboards are tastefully incorporated into their sound as an additional layer of atmosphere and sometimes a bit of symphonic flare over the most euphonious moments.

There was a time when I didn’t take music so seriously. I bought albums that rocked just so I can play then loud. I liked Metallica, Ozzy, Megadeth and Pantera not because of artistic appeal. I liked them because they sounded bad ass and rebellious. It was a part of my upbringing that set roots in my soul, and even though I spend a lot of my time now seeking out artsy albums that require patience and open mindedness to enjoy, there’s a part of me that still wants to play music that gets the blood pumping and nothing more. Grey Heavens is one of these albums. It’s music for metal fans like myself that want to feel young again – that want to reflect back on the times I used to crank up my truck stereo at the beach and bang my head so hard that my neck hurt for a week. For that, I thank Omnium Gatherum for being damn consistent.