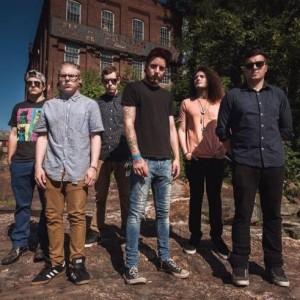 Construct Paradise released their latest single, “Haunt Me,” on Christmas day – and there’s a reason why the weather got hotter for a while there. Since its release, “Haunt Me” has gained some notable attention, and in my opinion, rightfully so.

On my first listen, the production was an immediate attention-grabber; the introduction uses multiple clean guitar tones, as well as “glitched” sound effects, which are all mixed beautifully together so nothing is overpowering. The clean rhythm guitar also manages to provide enough fullness for the leads over it to cut through without being too much of a focus because it depends on a shift in rhythm rather than volume; the switch to distortion, drums and vocals at 47 seconds is huge and relentless.  While it’s apparent to the trained ear that the band is using midi drums and a digital processor for their guitars/bass, these doesn’t detract from the song at all – and though digital recording is fairly standard for most “core” genre bands now, no aspect of the song sounds fake.

But the musicality is what makes the song stand apart from other bands in the Connecticut hardcore/metalcore scene; this song has it all, ranging from catchy sung melodies and beautiful guitar solos to hard hitting “djenty” sections that dance with upbeats to provide heavy grooves for the listener. At 1:31, piano enters the song, which changes what could have easily been a repetitive bridge into a melodic break; it’s the small elements that make me keep listening to the single over and over again.

However, at just under 4 minutes and following a fairly formulaic song structure – based on the repetition of choruses, but more so, the same vocabulary being used throughout the lyrics of the entire song – some purists may find themselves viewing this song as “not metal enough” for its more mainstream appeal. As a vocalist and lyricist, I found myself expecting more concrete information from the lyrical concept as opposed to relying on abstractions and the continuous “you/I” dialogue; despite this, it’s fitting for the song style, and works well.

The most energy in the song comes from 2:27 and doesn’t stop until the song ends; the rhythmic section of the chorus half-times, tension is created through drum fills, and technicality provides release at 2:51 via rhythmic vocals and shifting guitar riffs. The solo at 3:16 over a changed chorus manages to again take the listener’s attention through the shift in section dynamics, and the song ends with the most guitar technicality presented thus far.

Despite my lyrical snobbery, if you’re looking for something catchy, technical, but still heavy enough to groove and mosh to, Construct Paradise’s Christmas present is worth your time. – 5/5