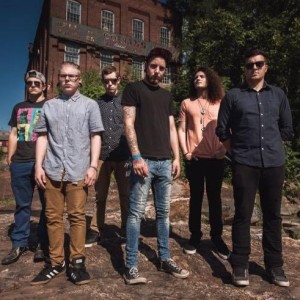 Though the Simsbury-based progressive metal band’s name seems like more of a command than a music group, the only commanding Construct Paradise has been doing is towards their live crowds and internet presence.  Their on stage demeanor is fun, their live sound is professional, and their crowds are feeling it. The band recently put out some new music and has been in and out of the studio recording an EP; and with a sound that’s influenced by ERRA, Northlane, The Contortionist, and Born Of Osiris, “complex yet catchy” is a description that just starts to scratch the surface. I had the chance to meet up with the band and get some of their own words in their first interview:

Glad we were able to do this interview! So, before we get to the more serious questions, I gotta know – how’d the name Construct Paradise come about?

Tom Gilkerson (Vocals, Guitar) – TG: We were in the midst of re-branding ourselves and writing new music and we wanted something that represented positivity and creating the happiness in your own life: Constructing your own Paradise, if you will, haha.

Dan Brennan (Synth/Keyboard) – DB: When we were all brainstorming names, originally I suggested “The Paradise Construct” which kind of alluded to paradise being a construct—an image or idea— in one’s imagination. Kevin [Lange, vocals] then suggested Construct Paradise, which had a cool ring to it, so we moved forward with it.

Your band has gained some national traction through YouTube promoters, and I recently saw that a Japanese website had given “Haunt Me” a review; despite that, only 2 songs have been released in the band’s existence. Has the response to your material affected the way you guys have acted as a band, or any future plans you have for the group?

Federico Zuccarelli (Guitar) – FZ: Hearing this kind of news blew me away…it gives a sense of realism that people do, in fact, take notice to new music, and would want to put their own opinions on it. It’s a really cool feeling, especially since we only have, like you said, two songs!

TG : It’s really bizarre because literally the first three days after we dropped Lucid Dream we had people from all over the world messaging us asking when we were going to release more music and if we can come to their city…

DB: …[It] confirms what we were hoping—that people are loving our music just as much as we do. All the YouTube comments say really nice things….One new friend we’ve met at shows, Donnie, drew our first fan art for “Haunt Me” when we released it Christmas day; our song touched him deeply and some of the lyrics really hit home for him personally. It’s responses like that that make us truly love what we do beyond our mutual love for music.

Jon Sottile (Bass) – JS: …The crowd reaction we receive with such little time and existence is incredible; however, we will remain humble and hungry for more accomplishments….Right now we know there’s a long road to still travel, but we are ready for whatever gets thrown at us.

KL: It doesn’t really change our personalities in an egotistical sense. It’s more so just excitement to get back on the grind of writing again!

Construct Paradise’s songs have a lot of layering and technicality going on; can you describe what the band’s writing process is like?

TG: Our process is a lot different now than it was when we recorded Suspended Animation [the 2015 release, which includes “Lucid Dreaming” and “Haunt Me”]. Most of the writing on the EP was done all in studio and took us a lot longer to finish a song, whereas now I have my own studio at home and Kevin runs Arkamine Studios. We’re constantly writing now and the ability to send out [recorded song ideas] to each other definitely improves the workflow….

DB: Our writing process was definitely disjointed at first as we were all pretty new to the process, but got smoother as we went along.

Matt Zall (Drums) – MZ: One person writes a song and we all learn it first. And it’s not till we’re very familiar with the song that the changes and additions start happening.

If the entire band got into a fight with a brown (grizzly) bear or a mountain lion, who would win – the animal or the band – and why?

FZ: The band, dude. Resourcefulness is key in every survival situation; plus, Dan is the toughest kid I know. He will literally DESTROY a grizzly.

TG: The band. Well, more so Dan. A lot of people don’t know this, but he’s a complete and utter savage. I doubt there’s a grizzly bear in America that’s trying to catch those hands.

Chris Wiseman, the guitarist of Connecticut’s Currents, provides a solo on “Lucid Dream;” I’ve seen you perform live before, and he also did the guest solo live. How did that come about, and what was working with him like?

TG: Chris was the tracking engineer for guitars on our EP and gave us a good outside opinion as the songs were being written. The decision to have him appear on Suspended Animation was something that just ended up happening, but he’s one of our closest friends so we always look forward to playing Lucid Dream live with him when we can.

DB: He was efficient and professional to track with. He has given us so, so much helpful advice from our start until now. Everything from equipment, to live performance, to working in studios, to live backtracks….We really would be no where without him—he’s the man.

KL: Working with Chris is very fun; our release “Lucid Dream” was a song I actually had written a long time before Construct Paradise. I asked him to help me record it, and he featured the guest solo during the process. When I showed the rest of the guys is when we decided to morph into Construct Paradise!

What is your opinion of the Connecticut metal scene, and how do you feel your band is perceived in it?

DB: Our band is a newcomer to the CT metal scene as of this past summer. The scene has been a great environment—I’ve met so many new faces, made new friends….One of the best things is that although music is in some ways a competition, it really feels like the opposite here in CT.

FZ: Point Beach [Clubhouse, a music venue,] is becoming that new local spot and I couldn’t dig that any more than I already do. Hopefully people just dig us and smile at our shows, that’s all I’m looking for to be honest.

MZ: The Connecticut music scene has honestly become a second family for me…and it extends past that: local New York and Massachusetts bands have also become part of the local scene that we involve ourselves in and it just makes it even better.

KL: The Connecticut metal scene has never made me feel more at home. [We see] our friends…at every single show!…granted, tickets are only 10 dollars, but I’ve definitely seen the same faces for the past 3 years and they are still friendly, supportive, and sing the lyrics they learn. I hope we are thought of as friends and an entertainment source for everyone.

You can keep up to date with the band by following them on Instagram @constructparadiseofficial, and Twitter @ConstParadise.