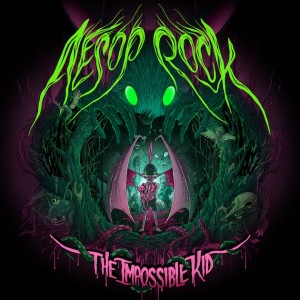 Rap music is a genre that I have little experience with, so this review might seem a little simplistic as far as in-depth hip hop commentary goes. But I’m going to give it a go, because I happen to be a big fan of Aesop Rock. This rapper turned my head with his EP Fast Cars, Danger, Fire and Knives. He has little in common with rap’s gangster aesthetic, which I’ve never been able to connect with. But his music talks enough shit to retain an aura of toughness and attitude. The musical backdrop to his rhymes is almost psychedelic, providing a colorful canvas for his unorthodox delivery. I lost track of his output for a while until The Impossible Kid came around. I’m officially back on the Aesop fan train. I suppose Aesop isn’t doing anything strikingly different here than what he’s known for. But luckily, the man is known for high quality. And I’m not versed enough in hip hop to know that an artist is phoning in on creativity. With rap music, I just want to like it. And I like this a lot.

Aesop’s delivery is unlike any I’ve heard. He has a biting sarcastic tone in a somewhat stoned voice. He comes across as impressionable, with a sort-of boy like innocence; a youthfulness that deteriorates when you hear the phrases he manages to come up with. His delivery is iron-tight despite his knack for pissing all over the confines of tempo and wordplay. Any moment of sluggishness or awkwardness in his phrasing always manages to line up at a critical moment with the beat. And even though phrases don’t come back full circle for a few sentences, he never leaves you hanging on an unreciprocated rhyme. “TUFF”’s choppy, lumbering pace is made even more askew by Aesop making it seem like he’s playing catch up with the tempo. He leaves you in constant anticipation of resolution.

Aesop’s use of wordplay is fucking spectacular. The various analogies, metaphors, half-rhyme and multisyllabic rhyming schemes shoot through your ears at such a fast rate that it’s hard to fully comprehend everything that comes out of his mouth. And the ultimate joke to all this is that some of it is completely nonsensical. On top of this, Aesop draws a lot from personal experiences for his lyrical content, which leaves some room for interpretation. So between complete ridiculousness and ambiguous autobiographies, the listener can pretty much fuck off when it comes to analyzing his words. But the words themselves are so witty, humorous and left-field that it’s enjoyable enough to go along for the ride. Tracks like “Shrunk” and “Lazy Eye” flow at a slower speed, so pretty much everything he says comes across clearly. Look here for a first taste of his phrasing style.

As far as the music goes, this is a fairly minimal affair. The beats are funky, hazy and dressed with occasional ethereal atmospheres, videogame sounds, vinyl scratches and speech sampling. It all sounds pretty old school and approachable – rap that would rather skateboard, smoke up and party than shoot up a rival gang and pay money for sex. Aesop doesn’t shy away from subtle amounts of confidence, roughness and mischief, so those who like their hip hop aggressive will still find plenty to enjoy. For me, I want hip hop to entertain me. And Aesop is one of the top entertainers I’ve heard in this field. And if you’re anything like me, you’ll find The Impossible Kid to be an excellent gateway into the hip hop world. Check it out!