“This is the local band version of brewing,” said Keith Zalinger of his craft beer endeavor Mythical Brewing Company.  “You can do whatever you want.”

Indeed he can.  Zalinger and his partner Frank (who wishes to remain somewhat anonymous in the alternative press) have been experimenting with home brew techniques for about a year.  They’re now ready to introduce Mythical’s work to the world, and Alternative Control was excited to be part of one of their first tastings!  Johnny Pluckman, Mike Devaney, and I headed to Zalinger’s home in Branford, CT — quite an auspicious location for starting a brewing company — and enjoyed four offerings, along with pizza, brownies, and great conversation.

The first beer we tried was Broadsword & the Beast, an easy-drinking 4.7% pilsner with a fruity base.   Next up was an unnamed American ale that was similar in taste to Broadsword with a little more carbonation and a slightly lower ABV.  Pluckman, our resident beer connoisseur, thought it tasted meady; this one would turn out to be his favorite of the night.

Next up was the Alt-Ctrl Ale, a nut brown that was sweet and peppy; this was my favorite, but I might have been a little biased because of the name.   At 4.9%, it had the highest ABV of the brews we sampled that evening.

The final offering was Mr. Steele’s Black #1, an oatmeal stout that Mike said, “unseated the brown as (his) favorite.”  It was chocolaty and smooth — and at 4.8% ABV, could be called a “session stout” if such a thing exists!

Also, a word on the Thimble Island tasting glasses… Connecticut craft beer enthusiasts know that Branford has more than its share of breweries.  Zalinger considers Thimble Island one of his inspirations, and we enjoyed a growler of the Ghost Island Double IPA after we finished up Mythical’s brews. 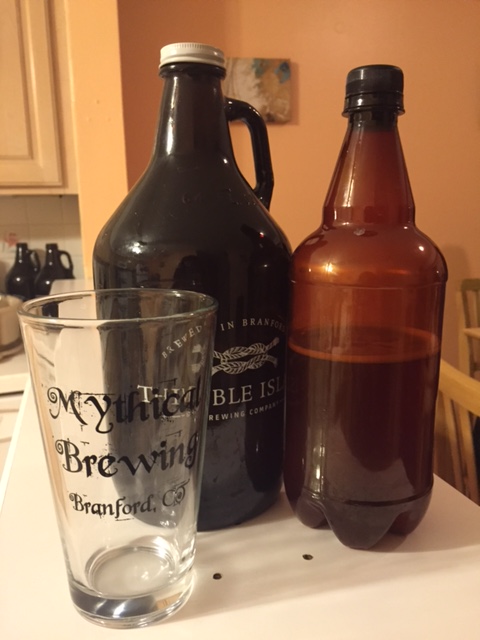 The plan for Mythical is to go “upward and onward at a snail’s pace,” Zalinger said.  There is a lot of capital standing between his kitchen and the commercial brewery of his dreams, some of which he hopes to crowd-fund with a Kickstarter or Indiegogo project.  But for the time being, holding small tastings and participating in local beer festivals are viable ways for him to get the word out about Mythical.  When this beer reaches supermarket shelves one day, Alternative Control will be proud to say we were in at the ground level! 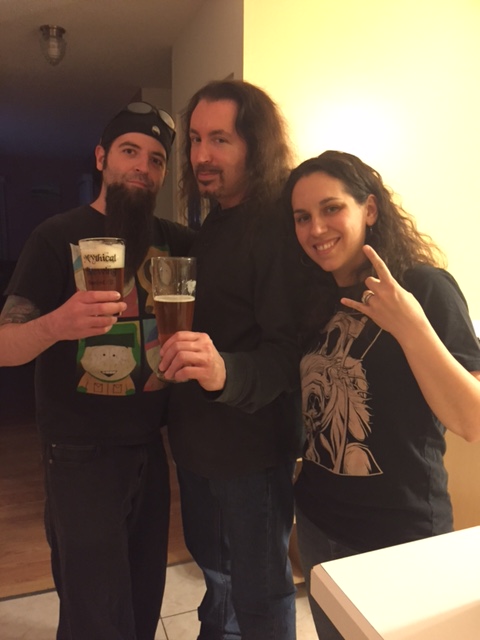