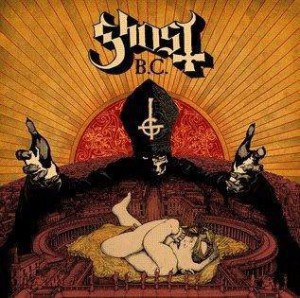 What the hell makes Ghost so appealing? The band has gathered quite an eclectic fan base in a very short span of time, so what’s the deal? The songwriting isn’t complex, the music is easy to digest and covers a lot of familiar territory, and the Satanist theme is anything but a new concept in rock music. They’re not the first band to wear costumes, have an elaborate stage show and pledge their anonymity either. So I ask again, what’s the hype all about?

I have a theory on why Ghost has gathered so much attention. It’s because Ghost is just a really fucking fun band to experience and listen to. That’s the gist of it. Let’s face it, as metal fans and musicians, we’re part of a music community that consistently thinks that in order to turn heads we need to be heavier, angrier and more technically advanced than everyone else. But come on, that mentality and those limits have been reached and exhausted. I’ve heard all kinds of bands that excel at being brutally heavy, jaw-droppingly technical and seemingly filled with hate and evil. In order to really make an impression, you have to do something no one would expect.

Ghost is a band I honestly did not expect. Yes, they wear their retro-rock and retro-metal influences on their sleeve, but their satanic ideology coupled with their almost friendly and melodic musical arsenal is damn endearing and done well! They have their gimmick, with the costumes and the anonymity and their comically eveeeal presence, but they have some strong and instantly memorable tunes to back that up. They’re like a celebration of rock and roll’s roots, the suspicions of rock music’s demonic origins and the sheer thrill of the live rock and roll experience all in one. Throw in some good ol’ blasphemous Christian mockery and Satan worshipping and you’ve got a recipe for success – bringing old rock fans and extreme metalheads together for fist-pumping fun.

Infestissumam continues this tradition, picking up right where their debut left off with a concept revolving around the celebration of the birth of Satan. All in all the Ghost sound is still intact, except things are way more epic this time around, and maybe a bit softer. It’s weird to think of a band selling out by getting heavier, but that’s what it would have seemed like if Ghost slipped into more acceptably extreme satanic waters. Instead, the poppy melodicism takes over the sinister parts of their sound in songs like “Body and Blood” and “Idolatrine.”  I not only hear Blue Oyster Cult in these songs, but a lot of late 60s psychedelic rock. The world of bodacious surfing and satanic culture collide in “Jigolo Har Megiddo” for example. I definitely embrace the accessibility of their pop leanings, and I’m happy that they’ve chosen to further separate themselves from the rest by incorporating a little bit of the Beach Boys into their sound. 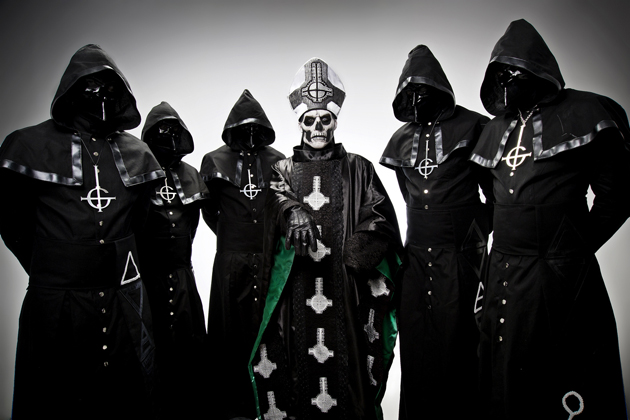 As I said, the band has also grown into a musically epic entity. The progressive rock monster song “Ghuleh/Zombie Queen” displays the band’s agility in writing long compositions that don’t have to bombard you with over-technicality. The song is engaging, multifaceted and a blast to rock along to. “Year Zero” is also a clear high-light, effortlessly stampeding along its triumphant praise for Lucifer with the help of a massive chanting choir. The song is loud, bombastic, imposing and commands obedience, guaranteeing that you’ll be singing the chorus after one listen.

Don’t worry, despite the softening of their music, the band still reminds us what side of the Christian debate they stand on. “Secular Haze,” with its smoky and maniacal carnival rhythm wouldn’t seem out of place on a King Diamond record, and the riffing in “Per Aspera ad Inferni” retains a dark and menacing architecture as it maliciously weaves its labyrinth of notes.

With all that praise being said, I still have some criticism. I can’t help but feel that the album loses a lot of steam about two thirds of the way in. Granted, “Year Zero” is a hard song to follow, but I still feel the band is fresh and creative enough to keep things energetic and interesting all the way through. The three songs that follow “Year Zero” are fine enough, they just don’t seem as compelling, perhaps due to the fact that I feel that they rehash the ideas from the first half of the album without adding any new touches of their own. On top of this, although I think “Monstrance Clock” is a great song, I don’t see it as a great closer. In my mind, I was envisioning yet another strong instrumental climax like “Genesis” from their debut. That song felt like it was leading somewhere magical, and when it ended, I was left with eager anticipation on what the musical tension was leading to on their next album. Infestissumam however ends with a droning hymn which although beautiful, kind of leaves me bummed that they couldn’t at least end with a bang after the previous three clunkers.

To sum things up, despite the couple of uninspired moments, I think Ghost made a great follow-up that will help boost their quickly rising popularity. There’s always a subtle expectation of failure the second time around, yet Ghost is a band that knew how to hit just the right relationship between the need for change and the establishment of a strong identity which every sophomore release needs to be successful. Infestissumam shows change and growth from its predecessor with its epic production and edgier songwriting, but also keeps Ghost’s identity intact by following in the same melodic, catchy and campy foundation that they started on. Now what’s next, the celebration of Satan’s marriage to Sauron?