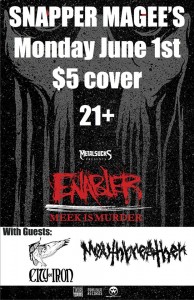 Meek Is Murder play hardcore that is technical, noisy and chaotic. The New York City-based trio, which features guitarist/vocalist Mike Keller, bassist Sam Brodsky and drummer Frank Godla, tear into their short, sharp, shocks of songs like men possessed, as heard on their new EP Onward, which has just released, along with their 2012 digital 4only Into The Sun as a 12″ LP on Rising Pulse Records.

The band starts a run of United States and Canadian dates with Enabler at Snapper Magees in Torrington on June 1, with City Of Iron and Mouthbreather supporting, so we thought this was the perfect time to send Keller some questions concerning the new album, their place in the New York City music scene, and why this tour is being called the “Frank Dies” tour.

Below are his answers.

How would you say Onward is different from your past releases? How is it similar?

This was our first time working with Kevin Bernsten and he’s a beast. He makes heavy music sound disgusting and that is cool. The approach to writing was a bit different as well- I pretty much ignored the fact that I would need to sing and play guitar at the same time and just focused on both pieces individually. I’ve always tried to be considerate of the fact that I will need to play songs live someday, but I decided to be a dick to myself and just worry about it later. Also, Sam and Frank are better players than ever and we all push each other. Onward has their best performances yet. I don’t know, it probably all sounds exactly the same.

What made you decide to package it with Into The Sun?

We didn’t want to do a “small vinyl” and this way you can call the sides “Kevin A” and “Kevin B” since they were recorded by Kevin Antressian and Bersten, respectively. Also, Into The Sun never had a physical release which I guess some people wanted. It sort of just fell into place when we started to work with Rising Pulse since we were all anxious to put something out but knew we wouldn’t have a full length done in time.  All the songs on Onward, all end in the suffix “-ward”. Is there a theme to this record? If there is, what is it?

The irony of living in New York is that it’s always moving insanely fast but can feel completely stagnant. Onward is about movement. It’s about not fearing change but embracing it; only looking back in order to connect the dots and move on.

In addition, Into The Sun, takes its cues from the world of cinema. What made you decide to do this? And why did you choose these specific characters?

Into The Sun uses some of our favorite SciFi franchises as lyrical backdrops, including Aliens, Back To The Future, and Firefly. In writing for this release, I wanted to experiment with using fictional characters as allegorical reference points. During writing, some of the themes that were important to me were redemption, dying alone, time- all things I could relate to stories told before and close to me. It was kind of a weird thing to do, in hindsight.

What is the NYC loud rock scene these days? How do you guys fit into it, if you do?

There are a lot of black metal bands and doom bands at the moment. Some of them are pretty good. We have never fit in but whatever. We’re amazed and grateful to have been able to play music for as long as we have.

In addition, do you think drummer Frank Godla will be tired after this tour, since he plays drums in both bands? Hey, this tour isn’t called the “Frank Dies” tour for nothing. He is a crazy maniac who works all the time and it was actually his idea to go out with both bands. I guess one set a night wasn’t quite up to speed with his lifestyle.

What is next for the band? More touring? Another record?

We all have jobs that we like so we’ve never (and probably won’t ever be) a tour-all-the-time kind of band. We’re extremely lucky to be able to make it out when we can and people still come to shows. We’re always writing- I had three songs written by the time Onward was released. A full length may very well be the next thing.