One of the cool things about being the editor of a music blog is that I get to talk with people all over the world about what inspires them.  Most recently, I chatted with Justin Pierrot of British Columbia, Canada about his solo death metal project Stormland.  He’s recorded a couple concept albums over the past decade and is about to release his third, Songs of Future Wars, on August 3rd.  This time around, the opus is about an anime series that I’m better off letting Justin explain in the interview…  But trust me, in spite of my lacking anime background knowledge, I can tell AltCtrl readers that the music is badass.  Pre-order Songs of Future Wars on bandcamp, check out teaser track “Integrated Weapon System (GAT-X105E),” and find the story behind the tunes below…

What the heck is a “Mobile Suit Gundam”?  And what inspired you to write an album about it?  (Them??)

Mobile Suit Gundam is a whole big meta-series based off an original Japanese anime from 1979 with the same name. It’s all about people fighting wars in giant, bipedal mecha.  [Editor’s Note: Okay, so now what the hell is a “mecha”? According to Wikipedia, the term refers to “scientific ideas or science fiction genres that center on giant robots or machines controlled by people.” Ohhhhhh….] While there are different timelines throughout the series, they’re all linked by those war machines, poor relations between Earth-based governments and space colonies, and the notion that going into space can kick-start human evolution. At its best, the shows are like “War Pigs” by Black Sabbath and Game of Thrones had an animated baby. There’s deep looks at social issues like racism/genetic supremacy, the military-industrial complex, how fascist regimes can rise, terrorism, and the damage war does to both soldiers and civilians. Not every series is like that, with some getting ridiculous, and in the case of one series in the 90s, a little racist with its ethnic stereotyping. Still, with nearly 40 years of history and a lot of shows that brought some deep, dark stuff to the table, how could I not get inspired? Just want to shout out my buddy Brendan for encouraging me to run with the idea, too.

Who is your favorite Mobile Suit guy?

Sticking with the album, my favorite pilot to sing about was Cagalli Yula Athha, in “Ideological Paralysis (MBF-02).” She had a fairly solid narrative arc in the Gundam SEED/SEED Destiny series, and I can relate to the idea of being caught between two sides in the wrong but having your ideals cause to freeze when it’s time to do something. As for my favorite Gundam itself? I’d say the Exia from “Conflict Child (GN-001),” because it’s armed almost exclusively with swords and beam blades. I love swords, so that makes it super awesome in my book!

The painted models you’re making are an innovative and labor-intensive merch idea.  How is the response to them so far?

A couple have people have purchased the straight-build pre-orders, where I simply build the model, but not the painted ones yet. I think that’s due to price. I fully realize it’s expensive, but my time is worth something. I spend a couple hours on straight-build, but a painted build can take up to quadruple that depending on what I’m doing in terms of color scheme and design.

Do you ever do live appearances, either as a one-man act or with a backing band?

I did one live show with a full band, back in 2006-2007. We played at a Thrash Wrestling show, Super Evil Bloody Death Hell Elimination Tournament 8 I think. It was fun, but I don’t think I could do it again unless I explicitly had enough or was getting enough cash to pay some hired guns.

Would you ever want Stormland to be a “regular” band with multiple members?

I wouldn’t want Stormland to be a “regular” band. I’m too sensitive and too much of a control freak with these songs to be able to make it work in anything other than a Jeff Waters/Devin Townsend-type situation. I also couldn’t handle touring. I’m not psychologically cut out for extended periods of time where I don’t get to be away from people.

Being a solo artist who can engineer his own recordings definitely has its pros. I can write and record on my own time, I don’t need a budget, and I’m not bound to somebody else’ schedule. As for cons? I don’t have a full, full rig with monitor speakers, so mixing and bouncing ideas off other people can get a little tough.

Stormland has had several different conceptual themes over the years.  Do you think you’ll stick with anime for future releases, or is something else cooking behind the scenes?

If not anime, then definitely science fiction. I’ve figured out that I like to tell stories, and this concept gives me a vehicle to do so. I’m not super angry anymore, and I’ve evolved past my immature youthful conservatism into a far more left-leaning dude, so I’ve outgrown the ranty sociopolitical stuff of the first demos. I don’t have to find stuff to be mad and shout at people about with a nerd concept, and that’s a lot better for me. Hate and anger are really emotionally draining and soul-crushing, and it was good for me to let those things go.

Once I finish with this release cycle, I’ve got a “fun” doom project with Richard Weeks of Olivia Neutered John and Blackened Death Records on vocals I need to finish up called Unlucky Star. It’s a nice palate cleanse for both of us, because he deals with a lot of dark themes in his music, and there’s some really dark themes on Songs of Future Wars. There’s two songs where I had to put myself into the headspace of child soldiers, and one song — “Psychic Casualty (MSZ-06)” — where I had to wrap my head around the idea of being mentally trapped within your body, aware of everything around you but unable to even move or respond. It’s like “One,” but even worse. I actually needed a few minutes to come down after finishing recording the vocals for that one. Probably the most intense thing I’ve put down. But I digress. After Unlucky Star, I might have another collaborative project, and then I’ll see where I want to go next.

What is the world of Justin/Stormland like when you’re not writing and recording death metal?

When I’m not making metal, I’m working or spending time with my family. Going outside to play after dinner, going to Mass on Sundays, that kind of thing. I like to make those Gundam models as a hobby, not just as a merch item – oh and shout out to Metropolis Comics and Toys in Burnaby, BC where I get most of my kits! I also do a little bit of MMA writing over at www.mmasucka.com. I usually handle recaps of the Ultimate Fighter, and have a weekly column where I recommend new entrance music for fighters called “The Walkout Consultant.” It’s a fairly simple life, nothing too crazy. Wouldn’t trade it for the world. 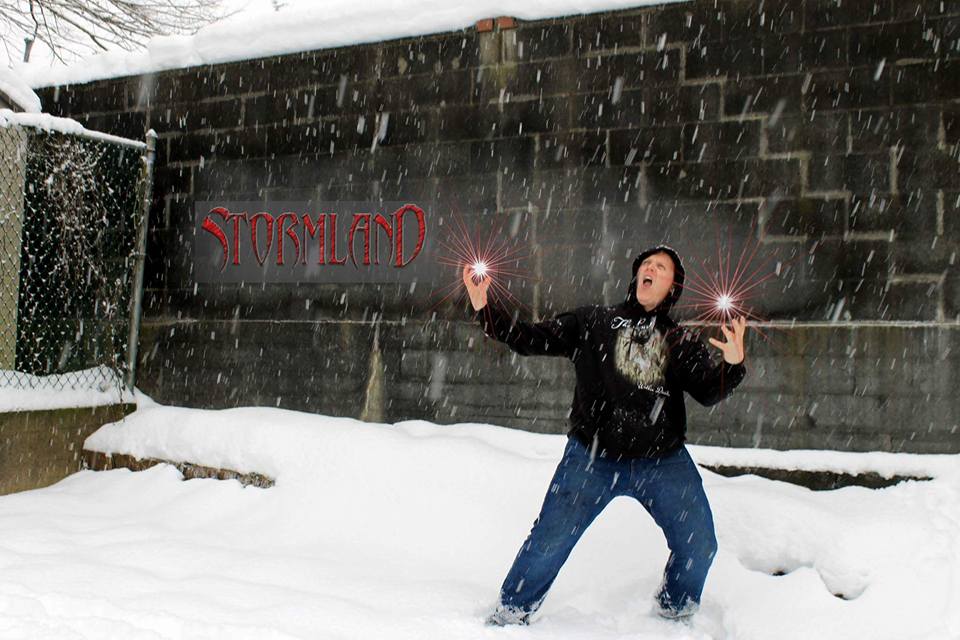