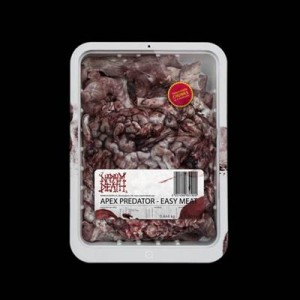 What else is there to say about Napalm Death? They’re one of the longest lasting and most consistent extreme metal bands in existence. And though they’ve been plagued with a few musical hiccups and numerous lineup changes in the past, they continue to be forerunners in the grindcore genre that they helped create. And this really isn’t due to musicianship or uniqueness. Many bands in their field are arguably tighter and certainly weirder. But Napalm Death have always stood out due to one defining attribute – anger. They’re one of the angriest bands on the planet. And this genuine rage is alive and well on their latest album Apex Predator – Easy Meat.

Now of course with this album and with most grindcore, you expect moments of musical blitzkrieg. But these moments are pretty scattered and of short duration. Napalm Death would rather not overwhelm the listener with lightning fast riffs and blistering blast-beats for forty minutes. Because listening to extreme music doesn’t have to be a test of endurance. And let’s be honest, a record that sounds like all the power tools in someone’s garage simultaneously being turned on at high power gets tiring fast. And that kind of intensity creates an impenetrable wall over whatever expression the band is trying to get across. “Sure guys, I get that you’re trying to tell me about sledgehammer murders, but all I hear is my dad’s hammer drill. I’m really not getting into the whole sledgehammer murder vibe. Slow the fuck down!”

Napalm Death has always been about spewing a clear message. And in order to make sure this message is heard and understood, the music needs to be penetrable and comprehensible. The secret is mid-paced riffs. The band defines itself on devastating volume and heaviness at a speed that sits just under breakneck and at the limits of human anger. And this is what makes Napalm Death and this album so enduring. The jogging pace of most of this music allows the listener the space in which they can connect with the anger in these songs. Human anger is all-accusing and wildly destructive if not checked, and so are these songs. Greenway’s voice assists in this correlation by having one of the most brutish voices in metal.

But this music manages to rise just beyond the limits of human rage. This is rage that’s mechanically consistent, conversant and focused. These songs take the inconsistencies of human rage and trim the unnecessary fat into a bullet. And this bullet is aimed for Napalm Death’s ultimate enemy: The hypocrisy of man. Humans as the “apex predator” are also “easy meat.”  As dangerous as humans are, they’re prone to great weakness. You get it.

I must say that as wonderfully executed as this is, the band plays it safe. Except for a few clean vocal parts and industrial metal moments, this is same old same old territory for the band. They still sound like a riot in a UFC locker room. But it’s still all about riffs seguing into other riffs and into other riffs without care for song diversity. I guess if you take some of their past attempts at changing up their sound into account, you couldn’t blame them for continuing on the same style that adorned recent accomplishments like Smear Campaign and The Code Is Red…Long Live The Code. But if it’s any consolation to fans, the band has probably created one of their strongest albums in recent memory. The production is suffocating, the lyrics are blunt and scathing, and the music is a big adrenaline kick to the ears. And to many Napalm Death fans, that’s all that they could wish for out of an extreme metal band that’s approaching middle-age.