Yndi Halda was in no rush to give their fans a follow-up to their popular debut Enjoy Eternal Bliss. The English post-rock band went into quite a hiatus, to the point that I certainly questioned their return. It would have been a shame if they called it quits after releasing such a stellar debut. Enjoy Eternal Bliss was a monstrous and cinematic slab of post rock drama. Now a decade later, they’ve finally emerged with a follow-up. And much like their debut, Under Summer is another monumental slab of post rock.

Under Summer presents all the trademarks of a typical p 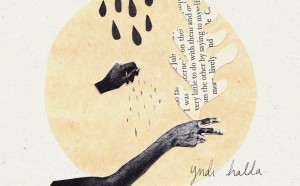 ost rock release. The four epics on this album ebb and crest slowly, gradually rising in volume and emotional intensity and then falling into quiet, practically heartbreaking dribbles. But the band’s identity is fixed on the sparseness of their instrumentation and their ability to stir a big emotional impact with restrained instrumental flare. The band doesn’t rely on musical complexity, at least on a purely technical level. I presume that this music is relatively easy to play. And the tempo never really rises above a galloping mid-pace, even in the album’s loudest moments. But the dynamic richness and emotional impression here is undeniable. These songs are lavish and sprawling, yet soft and delicately sad.

It happens to be a raw, rainy day in the middle of March at the time of writing this. I find the weather to be quite fitting for this album. The depth of longing and fatigue that exudes through aching sections of violin and acoustic guitar remind me of the quiet desperation one feels when awaiting the end of winter. Dramatic swells of electric guitar, marching drums and sweet string orchestrations are rife with hope for the eventual warmth of the coming spring. But in the present, while subject to the potent melancholy and hyper-sensitivity of this music, I can only think of today’s troubles and the cold, damp darkness. But strangely, I don’t feel particularly sad when I listen to this. This music is a reminder that life at times is full of negativity, but it’s those occasional peaks of optimism in even the darkest times that help us to overcome whatever ails us. Under Summer is grand sweetness in the saddest moments and beautiful, pastoral sadness in sweet, isolated spaces.

Because of the emotional weight of the music and the length of its venture, I can’t see myself giving this many repeat listens in the short-term. But that doesn’t mean it hasn’t made a lasting impression. For those of you who are familiar with and appreciate the post rock genre, this is an album for you. For those who wouldn’t shy away from the more symphonic, depressive and tender side of instrumental rock, you might want to give it a try.