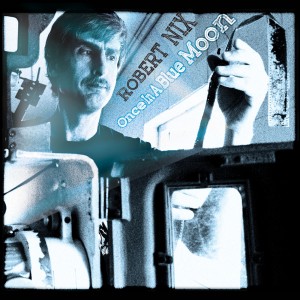 Once in a Blue Moon is Toronto alternative artist Robert Nix’s fifth full-length album.  He describes it as “appealing to the ‘intelligent alternative music fan,'” but in the end I was not intelligent enough for it.  The psychedelic feel changes proved too abrupt and I just couldn’t get into the groove.  That probably wouldn’t bother Nix, though — as someone who “Won’t Go With the Flow,” he probably doesn’t make his music with mass appeal in mind.

One highlight of the album was “Dad’s Song,” a tender all-brass instrumental.  Nix plays everything on the Once in a Blue Moon; he also recorded and produced it at his own home studio.  Certainly it takes talent and dedication to master a room full of instruments and recording equipment.  But there is also something to be said for the input of other musicians, even if one person in a group is the primary composer.  I can’t help but wonder how Nix’s songs would sound with other humans’ sonic contributions.

Released January 4th, 2016, the full album is available on CDbaby here.  If you’re a Doors and Beatles fan who wants to hear something way out of left field, give Once in a Blue Moon a listen.

For more from Robert Nix, find him on Facebook, Soundcloud, and the web.