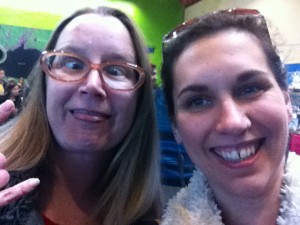 When Jessie May offered to take me to The Chocolate Expo at the Maritime Center as a member of the press I jumped at the chance. Visions of chocolate, caramel and other assorted goodies danced in my head as I imagined the diabetes I’d surely be stricken with by the end of the excursion.

Dear lord, what a terrible event. I’m sure everyone set out with the best of intentions, but fish and chocolate? Really?

Regular folks paid $15 to get in, $10 for their offspring. The usual Maritime admission is $20, so I’m not really understanding the pricing. But a pricing expert I am not. We got our hands stamped and went in.

The vendors were set up on the periphery, throughout the aquarium. The biggest issue for me was there were other people there, way too many people. And they stood in front of the vendors, not buying anything, just blocking anyone else from getting up close. Not that it really mattered; the free samples that were supposed to be part of the event were hard to come by. And I wasn’t looking for a handout — I had 60 bucks burning a hole in my pocket, but frankly there wasn’t anything worth spending it on. I bought beef jerky for my husband. It was nothing special, but I figured with the snownado coming he’d need something to sustain his life. And I bought myself a caramel/chocolate/Heath bar coated apple. You know, as my fruit serving. But the bars of tasty milk chocolate I’d hoped to stock up on just weren’t there.

Remember the TV game show $25,000 Pyramid? “No, little Suzie you’ve had too much sugar!” “Did you see that whoopee pie? I’ve never seen one that big in my entire life!” “Hashtag Maritime Center.” — Things you hear at the Chocolate Expo!

A sea of morons meandering through a freaking aquarium lined with overpriced sweets and savories. For crap sake! They had lobster bisque around the corner from the lobster tank! That’s just wrong.

The fish were the best part, because they weren’t trying to sell you anything. And while we did sample some really good rum cake, some mediocre cookie dough and some oddly out of place balsamic vinegar…this was a waste of an afternoon. The next chocolate expo will be at my house. And insulin will be our dessert.