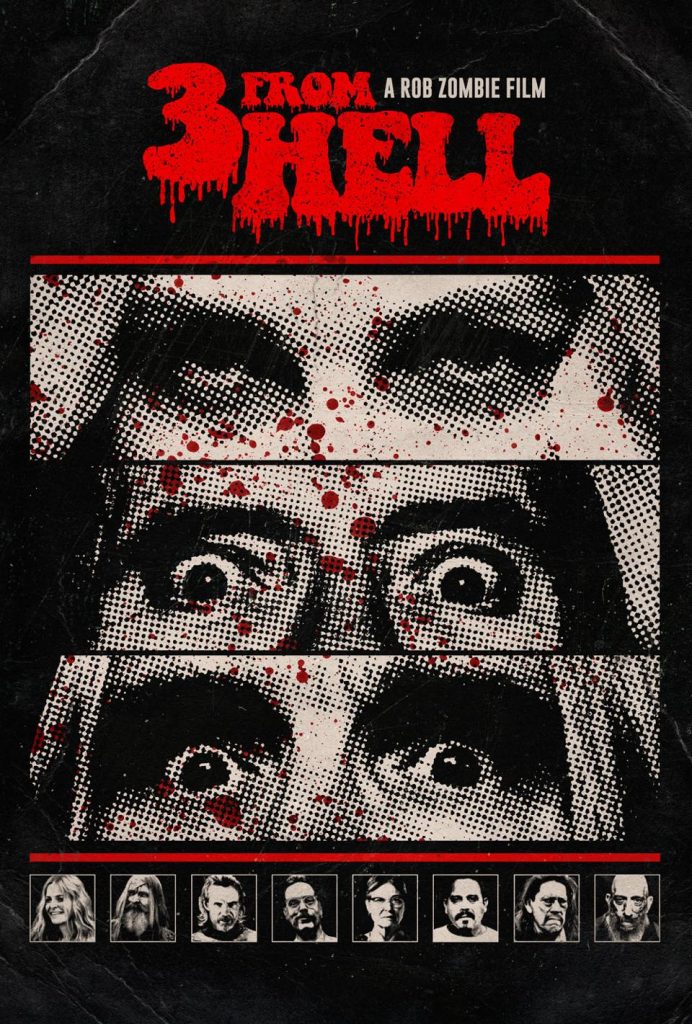 Let’s take a moment to chat about a highly anticipated movie sequel featuring a clown “dancing for the sins of the world,” grisly murders, and dark humor that premiered in theaters this month. I’m talking of course about none other than 3 From Hell, the latest chapter in Rob Zombie’s Firefly saga. After fourteen years since our favorite gang of misfits graced and ravaged the big screen, Alternative Control was On the Front Line, or rather, ‘in the fifteenth row,’ to bring you the inside, spoiler-free scoop!

We last saw the Firefly clan beaten, bloody, and staring down a police roadblock at the conclusion of 2005’s The Devil’s Rejects. As the trailer for 3 From Hell indicates, evil does not die easily, and Otis B. Driftwood (Bill Moseley), Baby Firefly (Sherri Moon Zombie), and Captain Spaulding (Sid Haig) somehow survive against impossible odds. Rounding out the group this time is Otis’ half-brother, Winslow “Foxy” Coltrane (Richard Brake), who quickly becomes a major player in the film in place of Haig’s character.

The movie is split into two segments totaling just over 110 minutes of run time, each with a unique story arch, conflict, and overall mood. The first ties up loose ends from Devil’s in a gritty and bitter environment of anger and psychopathy. The second half takes us on a booze driven journey of madness and family love. Plenty of one-liners and call backs to both Devil’s and 2003’s House of 1000 Corpses are sure to please long time fans of the Firefly Saga.

Typically, viewers are not supposed to root for merciless killers. Yet, the theater for 3 From Hell was filled with applause and laughs during even the most intense scenes that would incite reactions of shock and horror in any other movie. So why do we love Otis, Baby, and Foxy? Some possible answers not only address this question, but also shine light on why this movie is different from another movie showing in the theater next door involving a clown, murders, and a group of outsiders.

First, the absolute absurdism Rob Zombie brings to the screen makes it hard to keep a straight face. As seen in the trailer, Baby goes hunting with a bow and arrow in a Native American headdress, and chases down a helpless woman in slow motion. Those teasers alone are enough to garner an “Oh boy, what did you get yourself into now, Baby?” before seeing the full scene.

Second, as with Devil’s, there is no clear protagonist in this film. Sadistic authority figures, cowardly traitors, and a bloodthirsty gangster are all out to get our trio, leaving out a defined hero in the film. Third, and perhaps most of all is the spirit of love and family bonds between Otis, Baby, and Foxy. Even through the murder and torture, all three demonstrate an ability to care for each other and even mourn the past.

Baby is nearly in tears in one scene reminiscing about her brother Tiny, who does not survive the events of the previous film. Driven by the real life passing of Matthew McGrory, who played Tiny in both House and Devil’s, a psychopathic character becomes all too human and relatable for a few seconds. Likewise, another scene witnesses Baby and Otis talking about how they are all that remains of the Firefly family, again, playing on the real world deaths of several actors from the series. Baby even makes a true friend in the second half of the movie, showing her ability to connect with less damaged individuals.

We also are asked to consider whether Otis and Baby are indeed insane or simply playing a part: who knows what they do and doesn’t care versus who does not know any better? A scene in the first half of the film suspends reality for a moment to allude to Baby’s true mental illness in a way only Rob Zombie could come up with. As a result, there is a sense of sympathy for her as she could have been very different but was born with her demons that were fueled by a murderous family.

Make no mistake, this is still a Rob Zombie movie: you won’t find sophisticated Hitchcock grade stories or suspense here. There is ample gore, nudity, and brutality, a good deal of which is delivered by the Firefly clan. Some points could even be compared Quentin Tarantino’s style, including the segmented chapters of the movie and a fixation on feet like we see in Pulp Fiction and Kill Bill. But fear not, if anything, Zombie does Tarantino better than the man himself. Zombie further expressed his support of the #MeToo movement in an interview with Consequences of Sound, and works to maintain a professional and safe setting for his actors, especially those participating in nude scenes.

Bottom line: was this the film we needed this year? No. Was this the film anyone asked for this year? Probably not besides diehard Zombie fans. But if you are familiar with Zombie’s approach to art, this is no doubt a solid one and a welcome addition to the Firefly saga. Note that one  character makes a painfully brief appearance due to the real life illness of the actor, which is a major point of criticism among reviewers. However, I found the gap to be filled very well and sincerely enjoyed this movie.

Originally scheduled to show in theaters for three days before releasing on Blu-Ray and Digital in October, box office success has since warranted one more showing on October 14th. Visit Fathom Events to grab your ticket to 3 From Hell or pick up a copy of the film when it hits stores on October 15.

Alternative Control would like to dedicate this review to Sid Haig, who passed away while the article was being written. Thank you for the laughs, scares, and memories.