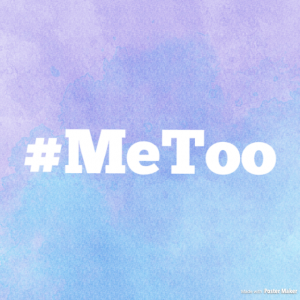 If you’ve been on the internet in the past week, you’ve seen someone post #metoo.  In fact, you’ve probably seen A LOT of people post #metoo, to acknowledge that they have been victims of sexual harassment or assault.  Most of the #metoos are from women, but not all — and if every woman on your friends list didn’t post it, each one was thinking it.

Carrie, Vanessa, Jessie, and Bair share their thoughts on this hashtag awareness movement and the pervasiveness of sexual harassment and assault in our culture, below:

When the Weinstein story broke one of my few political posting Facebook friends (that I haven’t unfollowed) suggested even though Trump and Weinstein were accused of the same predatory sexual behavior Trump was the worse offender. I immediately took the opposite opinion. As a producer of popular culture Weinstein was responsible for creating, upholding and reinforcing rape culture. If he produced a film that objectified women he got to objectify them first. And, let’s face it, women are objectified thousands of times a day on movie screens, television screens, phone screens, billboards, magazines and everywhere else every day across the country in order to sell entertainment, cheeseburgers, fashion, anti-perspirant and constipation cures (just to name a few).

The thing about rape culture is that we’re all victims of it. Men, too. This atmosphere created, upheld and reinforced by the media teaches men it’s okay to objectify just as much as it teaches women that we’re objects. It normalizes the entire construct. Add to that the glorification of binge drinking and you get the Brock Turners of the world. If you add gun violence as conflict resolution (another cultural establishment reinforced by Hollywood) you get victims of domestic violence and worse.

#Metoo. Of course, #metoo. I have been groped by strangers and harassed on the street. Looking back, years later, I can’t say for sure if those experiences had a lasting negative effect on my trajectory in life. I can surely say that “old boy networks” and “gender roles” screwed me out of my potential. Are they all part of the same thing? Maybe they are. The hashtag #metoo is our opportunity to present our true experiences on a global media platform without the assistance of Hollywood’s old boys. Real women writing our real stories of victimhood and survival. Recounting our bravery or indifference but ultimately spelling out every last ounce of our triumph in a world designed to defeat us.

Y’all know I’m one of those ultra-leftie social justice warriors and I’ve been talking about feminism for years.  But when the time came, I was hesitant to post #metoo. What would my co-workers think?  Was I admitting to weakness?  Did #metoo make me damaged goods?  Of course my head knew, “That’s what rape culture wants you to think.”  But I really couldn’t get my fingers to the keyboard….

I wasn’t willing to admit #metoo to the Facebook world until I saw Carrie Johnson post it and then completely shred some troll who left nasty, ignorant comments on her post.  If one of my good friends had the guts to say something, was I going to just sit there?  To paraphrase a great philosopher, it’s the silence of our friends that stings the most.

#metoo is not a competition.  I’m sure mine are “better” to have experienced than a lot of other people’s (i.e. less physically harmful and/or damaging to the psyche).   I’m not going to enumerate or go into detail about them.  The only thing I will say is that the most upsetting incidents have all involved trusted friends.  #thanksbro #idontwantanytea

With every one of these social media movements, there are naysayers.  Some are complaining that all the #metoos “water down” the stories that most deserve to be told.  Like I just said, it’s not a competition to see whose experience was more horrific.  It’s about the fact that it’s nearly impossible for a woman in the United States to make it to adulthood without being sexually harassed or assaulted.  Second, isn’t writing a column titled “ Why I’m Not Joining the #MeToo Hashtag Even Though I Was Sexually Harassed” pretty much the same thing as just writing #metoo?

Others are saying that the onus to dismantle rape culture shouldn’t be on survivors.  This is a more legitimate qualm.  But when have the oppressors ever given anything to the oppressed of their own free will?  It’s not until rape culture is called out undeniably that perpetrators and bystanders will see the error of their ways.  Objectifying women needs to go the way of casual racism — it must become something that used to be acceptable, when we were collectively not as enlightened as we are now.  And that will only happen if we — women and men — continue to speak out.

Bear with me, this is not a ‘mansplination’ where I ignore the topic at hand, or talk about whatever I want to. I need to explore the social climate to arrive at the juncture where, in my opinion, #metoo is the single most effective movement in a time where both valid protesting and idle whining have become redundant in their frequency.

The way that the media has portrayed recent events has been divisive, to put it in the most plain terms. Caucasian police brutality leads to sports anthem protests that purportedly disrespect the military while Nazis demonstrate openly on American soil, and all the while the White House is the set for the newest reality show, complete with twitter commentary, scandalous behavior, and political intrigue. It’s enough to make a sane person speculate what is so fanciful about the ‘information age’. Someone might wonder if there is a single positive use for social media.

What #metoo achieves is everything that everything else is not. It brings attention to but does not glorify an issue that has, for some godless and irredeemable reason, lurked in perpetuity for time out of mind. I am not the first to say this, but I must repeat that this is not about Harvey Weinstein. Or the president, or even a drunk Ben Affleck. I wish it were; there would be a handful of scapegoats that could receive karmic justice and the world would be a better place. It will be better, ever so slightly, when anyone who has imposed themselves sexually on an unwilling participant is punished. But there may not be a suitable punishment, considering the act takes something that can never be returned, and permanently brands the victim mentally and emotionally.

As a 35-year-old heterosexual white male, I have never once, in any way, and strike me dead where I stand for a liar, made a sexual advancement on someone who had not expressed consent. The concept that I could take part in any act that was even remotely sexual with someone who had not confirmed their desire to participate is such a foreign notion that I cannot in any way relate to those who commit these offenses. So when I am scrolling past every musician promoting their band and wrestler hyping their next show, the sob stories of pessimistic people who cultivate their own negative habitat and the baby pictures from every proud mother and father, and I see #metoo with a copied and pasted explanation, I say “Great, another ice bucket challenge.”

But then I read what it is about and what it hopes to accomplish, and it’s more like “If I can get 1,000 likes and shares…” but instead of the new puppy or chores for a month, these women and men are getting vindication. They are now empowered by casting aside the supposed shame that society dictates they should succumb to, they can embrace the freedom and relief of speaking out. The burden of silent suffering is unloaded, either with a whisper or a proclamation, in the form of a hashtag. It doesn’t make anything right, it doesn’t undo the damage or erase the past, but it means that the scope of this appalling but commonplace atrocity can be seen for what it is: an epidemic that has never been treated.

Watching the first few “me, too” posts trickle through my newsfeed barely even fazed me. “Repost if you’ve been a victim of assault OR harassment.” It’s almost laughable to think there are women who haven’t been victims of harassment at some point in their lives. Could I quietly slide my own admission in there and not have to back up my claim with actual stories or evidence? [It’s not something I talk about. I don’t want you to ask about it. If I wanted you to have details I would’ve shared them already.] If the point of this movement was to show how widespread the problem is, the specific details shouldn’t matter, right? Weird how the admission that you’ve been a victim feels so shameful, but the decision about whether or not to add my hashtag to the growing list didn’t come easily. After a full night of sleep and much consideration I (somewhat reluctantly) posted my #metoo, expecting only a few likes and supportive comments and commiserations from friends.

Not three hours later the inappropriate comments started. Trying to have an intelligent conversation with someone who lacks intelligence is surprisingly difficult. I have Opinions on this subject, but I am very emotional and therefore private about it. He chose name-calling and attacking without regard to facts as his weapon. I chose a neutral, emotionless stance and tried to educate him about such basic concepts as consent. The assertion that harassment and assault aren’t political fell on deaf ears as he desperately tried to twist things into a “libtard” issue.

By dinner time it had escalated to victim-blaming and threats of violence. I was getting all kinds of private messages and people were certainly judging me for even being “friends” with this person to begin with. The most frequently asked question was why I didn’t just delete my status. And therein lies the problem. If every time a woman steps forward and is greeted with ignorance, misogyny, and confrontational rape apologist behavior and she is expected to silently just back down, her voice is essentially silenced and rape culture wins. My Facebook status was going to stay.

I’ve read through it several times in the days since, grateful for the friends who spoke up publicly or reached out to me privately. I feel sick when I read it. This horrible dumpster fire of a post that was only ever intended to be a quiet admission of my own ‘victimhood’ but which had devolved so spectacularly that I was no longer merely just adding my voice to the chorus but standing strong like a badass feminist driven by a mixture of stubbornness and spite, trying to sing a solo that I am not vocally prepared for.

I’ve seen several posts claiming that “compliments aren’t harassment” (mostly from men seemingly trying to justify their creepy behavior). “I’m going to tell you what I think and then I’m going to tell you how you should feel about it,” is such a bizarre concept to me. Compliments that make you feel threatened or degraded are not compliments. Men who fall all over themselves making excuses and justifications for harassing behavior are terrible. Women who do this are even worse. Rape culture is alive and well in this country and that will never change unless the conversation continues. There is a twisted sort of comfort in seeing the other #metoo posts and realizing just how not alone you really are. If some viral hashtag is what it takes to bring awareness to the issue and start conversations with the opportunity for learning and growth, I’m all for it.

What do you think about the #metoo movement?  Has it changed how you view sexual harassment and assault?  Respectful comments are welcome.