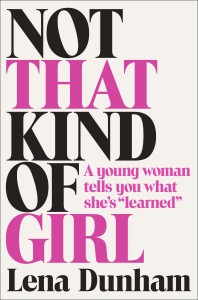 I must preface this by saying, since the show Girls debuted on HBO, I have watched it, often confused myself, as to why I was watching it, but even more so, why I liked watching it. If my oldest friend was asked to compile a list of shows he’d expect me to like, I sincerely doubt that show would be on it. I am pretty sure, over a decade ago, he bribed me with something in order to see how long I could last through an episode of Sex and the City. To this day, I have never seem a whole one. I was about to throw up even trying to watch that drivel. And when I saw commercials for Girls, I assumed (wrongly) it was just an updated version, with the same type of vile woman who I wouldn’t spit on if they were on fire (but would spit on for fun, given the chance. This chick knows how to do things the right way, damnit!)

I was wrong, though.

Girls is nothing like that, even though sometimes I’d like to slap some of the characters around a little. (Okay, a lot. It’s not my fault Marnie is the kind of girl who has bugged me simply for existing since I was a kid, even though she has come around a bit as the seasons progressed.) The characters deal with real things, struggle with their weight, with crappy relationship problems, with mental illness, with drugs, with money and jobs. You know, things real people deal with – not where to get some brand-name shoes or where to eat off tiny plates and be bitchy, old, horny women. (I honestly have no idea how old the women on Sex on the City were… they look old to me now, to be honest.)

But I digress, though this does have a point. I just came to really like Lena Dunham from watching the show and reading her Twitter and other such things, which is truly one of the greatest things in the world, if you think about it. Unprecedented access to people and information, although controlled by them, that we never had in the past. Lena seems like good people. She seems real. So naturally, I had to get her book, Not That Kind of Girl. And it hit me like a ton of bricks: I like her because she’s young me. A young me who is far more successful, and lucked out in ten thousand ways, possibly because she appears to have been born into more money, and with more creative parents who encouraged her a bit more with the writing and the art. My husband was laughing at me the few times I just sighed and closed the book and said “Well, just fuck me, that could have been me.” In fact, she dropped out of the college I went to because she hated it (as did I, but the credits I had accrued wouldn’t transfer to a more traditional school, due to the lack of math and science.)

It’s hard to review a book that is so much like your own life (again, minus the astronomical success of an award-wining TV show and best-selling book. I’m writing this from a crappy cubicle where it’s too hot and I am dressed in my “work costume.”). In short, Lena Dunham recounts the life of a socially awkward, sexually curious (and sometimes devastated) girl with immense amounts of creativity and ambition. Her writing style is not dissimilar to that which she uses for her show – and it is clear that Hannah is far more autobiographical than fictional, though inserted into a more fictional world.

And I’d address the whole manufactured “controversy” about this book – except it’s not actually in there. That’s really all that needs to be said. None of it is true… just some really weird Republican men who run a couple of conservative (imagine that word being spit out like it was the most vile thing ever) Web sites, have a weird hate-boner for this woman and extremely poor reading comprehension, coupled with a lack of understanding as to how autobiography, pseudonyms, and artistic license work. (Oh and how childhood memories are not the same as recent adult memories.) Frankly, all this “controversy” is at a minimum slanderous against Lena Dunham and it’s hard not to feel bad for someone taking that kind of crap for a brutally honest memoir where she doesn’t hide from the awkward, bad, painful, and outright horrible moments of her life. She doesn’t focus on them, or linger too long, but isn’t afraid to bare it all.

All in all, the book is just a little more insight into who the real Lena Dunham is, and while I liked it, it was a very quick read – and there wasn’t much that came as a surprise to anyone who watches the show Girls or follows her on Twitter, both of which I do. In 2015, I’d like to see her branch out and do something totally different – deviate from herself as the central character of everything. That said, I’m not sure she can do it. Which is probably okay, too. After all, I get it. I reviewed her book and probably wrote more about myself than the book. Some of us are wired that way and I suspect Lena Dunham may well be.

Either way, good on her for making a thus far, successful career of it. That’s more than most of us can say, never mind at age 28.