North of the Wall, a skinchanger enters a wolf’s body and gorges himself on human flesh.  Thousands of miles to the south, a fourteen-year-old queen tends to three ferocious dragons in the hopes that they will win back her ancestral empire.  In between, a beaten populace has more immediate concerns than wargs and winged beasts: avoiding armies of warring nobility and finding something to eat. 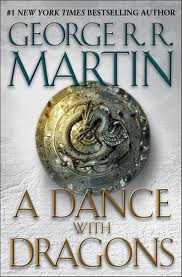 This is the state of Westeros in A Dance with Dragons (2011), the fifth novel in George R.R. Martin’s acclaimed fantasy series A Song of Ice and Fire.  Martin is often compared to Tolkien and Robert Jordan, but he’s much darker.  Tolkien of course is pretty “PG” and Jordan might throw in some true love here and there, but Martin is heavy on sex, torture, and more sex.  (Imagine The Girl with the Dragon Tattoo, except with real dragons and about fifty more characters…)

Weighing in at three and a half pounds – yes, I put the book on my bathroom scale – Dragons is a beast, and it’s impossible to discuss it without mentioning the other books in the series.  The first, A Game of Thrones, introduces the Starks, the Baratheons, and the Lannisters; these interconnected noble families are “friendly” at the beginning of the book, but mortal enemies by the end.  Readers also meet Daenerys Targaryen, a young girl whose father was king before being ousted in a civil war that took place before the book began – and who some say is the true heir to Westeros’s Iron Throne.

By the second book, A Clash of Kings, Westeros is embroiled in civil war.  Everyone wants the Iron Throne for themselves and they will stop at nothing to get it – whether that means sacrificing infants, seducing their siblings, or betraying their closest allies.  The plot thickens in A Storm of Swords and A Feast for Crows, as Martin kills off beloved characters and convinces readers to sympathize with some of the vilest.  Also, the influence of magic and otherworldly forces grows throughout the series.  In Thrones, for instance, characters dismiss the threat of “snarks and grumkins” as old wives’ tales – but by Crows, it’s like, “Holy shit, there’s fucking zombies!”

And now to Dragons.  Like the other books, the story is told in alternating point-of-view chapters.  Some old favorites return and minor characters take on major roles; the conflict that began with the coup of Aerys Targaryen before Thrones is now coming full-circle.  Good things: the hard-drinking, whore-loving dwarf Tyrion Lannister, easily one of the series’ most compelling characters, has returned after being absent in Crows.   And Jon Snow, a bastard of House Stark, is kicking ass and taking names as Lord Commander of the Night’s Watch – at least so far.

Bad things: as my fiancée and fellow fantasy fan says, “Here comes another character I don’t care about.”  There are a TON of characters in A Song of Ice and Fire, and Martin adds more with each book.  There were definitely times where I found myself skipping ahead to see when the next Tyrion chapter was.  Other times, I felt like I needed a chart to figure out who did what, who killed whose nephew at the Blood Wedding or the Battle of Whatever…  Since it can be hard to keep track of the complexities that develop with each book, I recommend rereading the others before diving into Dragons.  (Or at least looking at the Wikipedia summaries — just don’t read the character descriptions!  They’ve been updated to reflect the current novel, so you’ll find out some things that you don’t want to know.)

On a side note, A Song of Ice and Fire fans widely approve of HBO’s adaption of the novels.  A Game of Thrones ran its first season in 2011 and the second season (based on Kings) is supposed to come out this spring.  HBO did a good job of sticking to the book thus far, but it will be a challenge for them to incorporate the ever-expanding plotlines as the series continues.

So, should you go buy A Dance with Dragons?  If you love fantasy novels and don’t mind delving into the dark side of human nature – or keeping track of nine thousand characters — then yes.  Just make sure you buy the first four as well, or you’ll have no idea what’s going on.

And don’t expect to be satisfied with the ending.   Two more books are due to follow this one: The Winds of Winter and A Dream of Spring.  At the pace it takes to write these mammoth novels, you’ll be waiting a long time to see who finally wins the Iron Throne.