Today we have synth player Damon Hardjowirogo of Infinity Shred taking over Nerd Talk, on the day his band releases their new album Forever, a Fast Life.  Ever artistic, they’ve also put out a short film of the same name.  Watch, then read on!

My sister first put me on to this movie when I was an incredibly impressionable 13-year-old. Having grown up in Manhattan in the 90s, my personal experience of NYC was far less gritty than the New York you get to see in The Warriors. It always fascinated me that the sights in this movie felt from such a bygone era, when even my sister was old enough to see some remnants of it. As goofy The Warriors is, there are two important things to be learned from it. The first is that guns are bad, the second is that the people have the power if they’re willing to band together and take it — we just need to look out for people like Luther from The Rogues who want to sabotage us from within.

It turns out that The Warriors subconsciously impacted a lot of my artistic decisions later in life. First off, what a sick soundtrack. The original score had such a good blend of electronic and rock elements in a time where not much that fused the two was particularly tasteful. Second, the first two music videos Infinity Shred ever made — for our songs “Wayfinder” and “Void Ripper” — both featured inexplicable gangs in matching outfits who looked simultaneously ridiculous and enviably cool.

It would be a lie for me to say that I could talk endlessly about the stories told in this trilogy or even that they are truly my favorite books. But what the Blue Ant Trilogy instilled in me was a personal sea change that I’ll never forget and always be incredibly thankful for. As a child it’s fair to say I only cared about Star Wars — the lasting impact of this was that I had trouble finding interest in anything that wasn’t founded in some sort of science fiction or cyberpunk aesthetic. Set in present day, the Blue Ant Trilogy finally gave me an appreciation for stories told in the here and now.

Cayce Pollard is just one of my favorite character’s I’ve ever encountered; there’s a moment towards the end of this trilogy involving her that comes together so perfectly that I couldn’t help but get teary about how thoughtfully put together this whole story arc was. 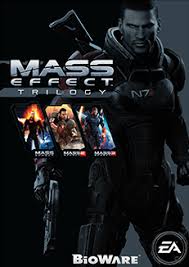 I bought my first copy (yes I’ve now purchased it multiple times) of Mass Effect off of a guy for $5 while he was in the middle of selling all of his games back to a Game Stop. I went home, tried it for a few hours and felt incredibly disappointed. Six months later for no particular reason I decided to give it another shot and something just clicked — I was so immediately immersed. Everything from the widely varied combat mechanics to the emotional decision making made me feel the most in control of a game experience that I’ve ever felt. The Mass Effect trilogy was so thoughtfully and thoroughly designed for longterm emotional investment and that’s exactly what I gave it. I’ve tried so many times to go back and do a “Renegade” play through where you make all the mean choices but I can never bring myself to follow through on it — I just feel too much attachment to the characters those decisions impact.

Fun Facts: It’s very likely Nate (the guitarist of Infinity Shred) and I would never have become closer friends or even ended up working together if it wasn’t for me lending him a copy of the first Mass Effect.  There are several references to this series on our first full length, Sanctuary, including the album title itself.

That’s a wrap!  Find Infinity Shred on Facebook and the web, and make sure to check out their brand new album!
For more from Alternative Control, find us on Facebook, Twitter, Instagram, Soundcloud, and bandcamp.